When preparing editions of the Irregular Bird, I enjoy researching the natural history of the species in question. However, as anyone who goes on such a quest on the internet would know, this often proves to be a bit of a rabbit hole leading in unpredictable directions and taking up lots of time. 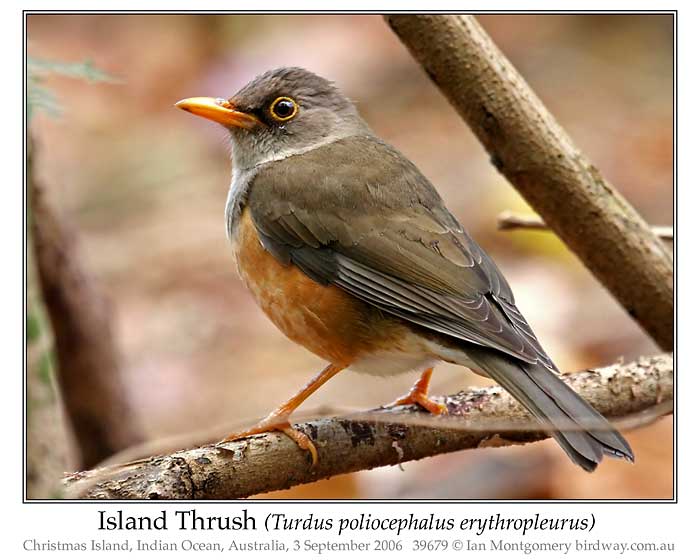 Such was the case this time round as I had decided, given our current travel-free situation, to take us on a trip to Christmas Island with photos of about ten of the most interesting species. This led me down endless rabbit holes and the weeks ticked by. One of these that I found particularly interesting, biogeographically and taxonomically, was the Island Thrush and, unlike most of the others, it hasn't featured previously as an Irregular Bird, or Bird of the Week as it was in 2006. 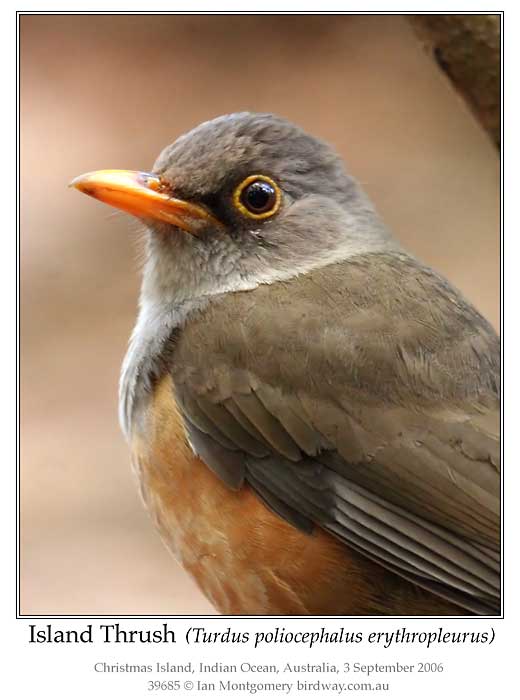 This rather smart thrush is one of the typical thrushes comprising the genus Turdus, the members of which are widespread throughout Eurasia, Africa and the Americas and includes such well-known species as the Common Blackbird, the Song and Mistle Thrushes of Eurasia and the American Robin. The Island Thrush is about the same size as the Common Blackbird, to which it is closely related and is also a fine songster with a similar flutey song (listen to it here https://www.xeno-canto.org/204160). 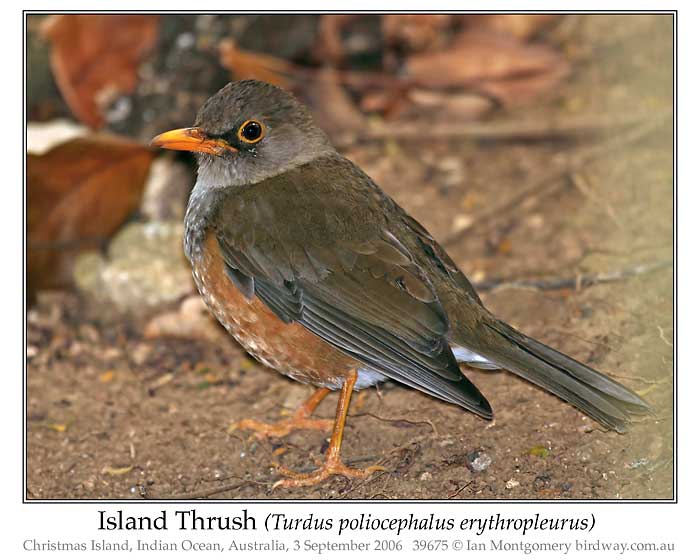 This particular subspecies erythropleurus (meaning red-sided, or literally red-ribbed) is endemic to Christmas Island and was originally described as a full species Turdus erythropleurus by Sharpe in 1887. Subsequently it was found to be a race of the Island Thrush which is widespread but local through Southeast Asia from Sumatra and the Philippines and tropical Australasia and Oceania as far east as Samoa. Christmas Island is indicated by the brown arrow on the map below. 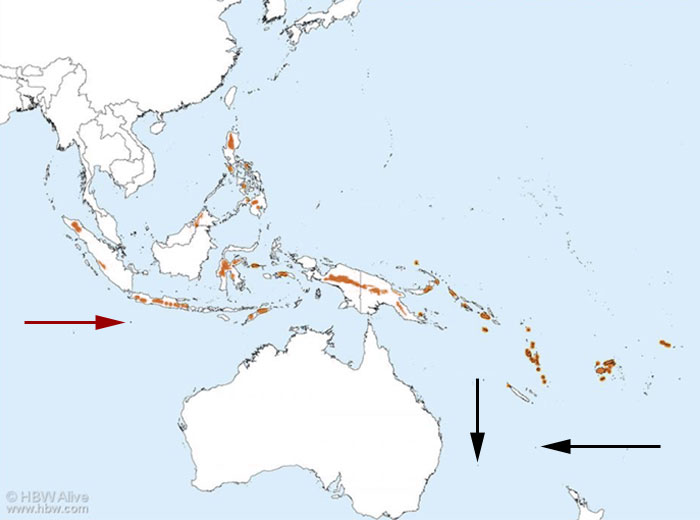 The first race of the species was described by Latham in 1801. He called it the Grey-headed Blackbird, Turdus poliocephalus (polios is Greek for grey). It occurred only on Norfolk Island (horizontal black arrow on the map) and is now extinct, while another 'species' the Vinous-tinted Blackbird Turdus vinitinctus, also now extinct, was described on Lord Howe Island (vertical black arrow). The Christmas Island race is the sole surviving one on Australia territory. 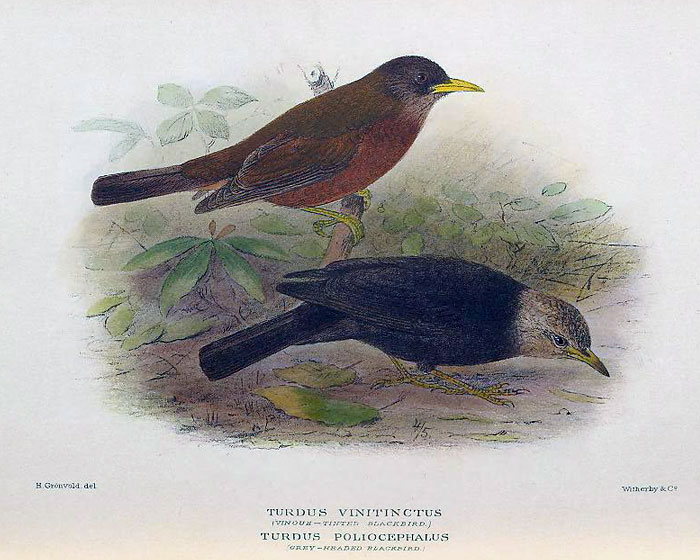 You may be struck by the different plumages of the various races, so it isn't surprising that they were originally treated as different species. The colour plate above was created by the Danish artist Henrik Gronvold, and published in this book, below, as an appendix to the Birds of Australia, by Gregory Mathews in 1928. 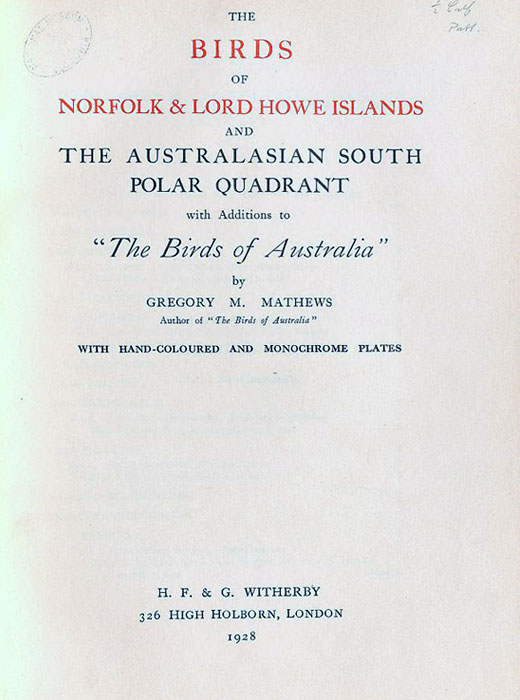 In fact, all the various populations of the Island Thrush differ greatly from each other in appearance. Below, stolen from Guy Dutson's Birds of Melanesia, are two other races, one completely black (efatensis on Efate, an island of Vanuatu) and the other with a white head (albifrons on Erromango, another island of Vanuatu). In some race, the sexes are similar, in others they are different and the plumages of the juveniles are quite variable too. In fact the Island Thrush's main claim to fame is that it is globally the most variable species of bird with nearly 50 subspecies. DNA studies show that the subspecies appear to be all closely related with one exception: the northernmost one on Taiwan, niveiceps, is considered a candidate for elevation to species rank. 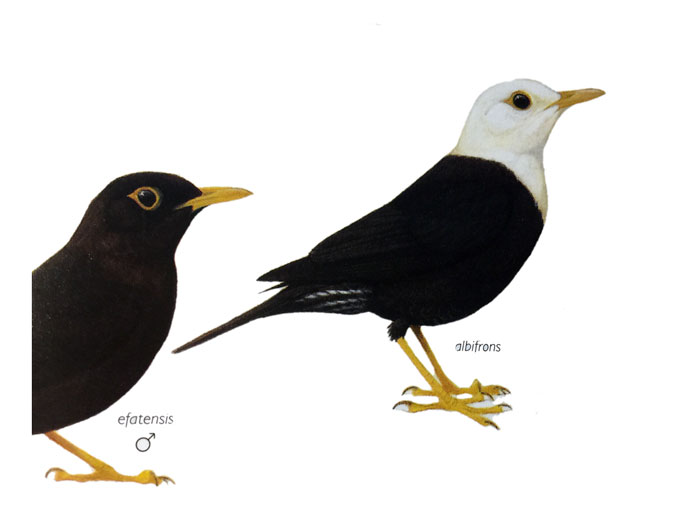 The variability and wide range of the Island Thrush is paradoxical from the point of view of biogeography. On the one hand, varability and divergent subspecies indicates isolation with a lack of genetic flow among populations, i.e. the birds don't move between islands. On the other hand, the wide range suggests that the Island Thrush is or was very good at getting from one place to another. This apparent contradiction is another mystery waiting to be solved. 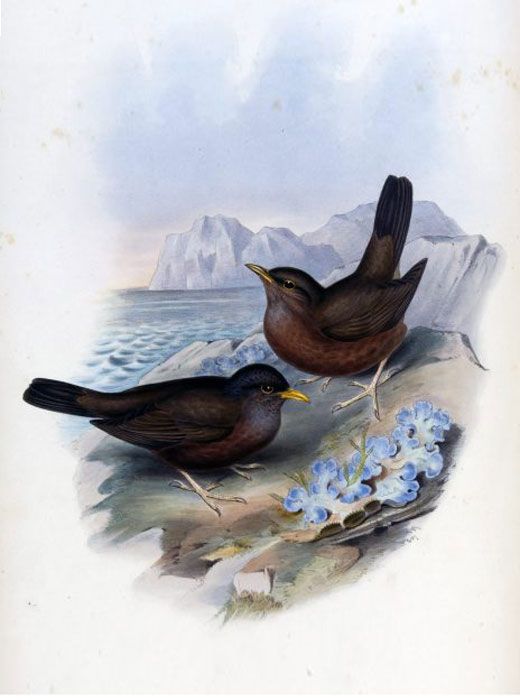 John Gould also illustrated the Vinous-tinted Blackbird on Lord Howe. Like the Grey-headed nominate race of Norfolk Island, the sexes were similar so the browner bird in the plate presumably represents a juvenile. In the background are the two high mountains on Lord Howe, Mount LIdgbird (left) and the flat-topped Mount Gower. This species was quite common until a shipwreck introduced rats to the island in 1918 with fatal consequences for this ground-nesting bird. 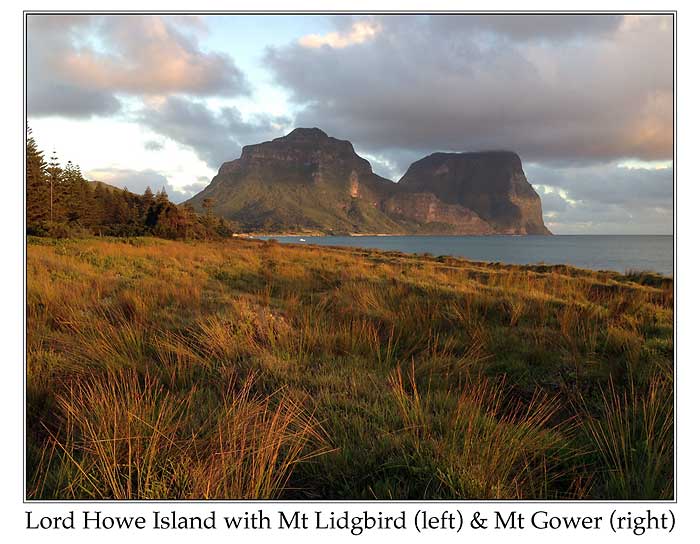 Spending a lot of time in isolation has given me the opportunity to work on the website not only adding birds and mammals from the trip to Brazil and Chile last year (about 120 species at last count), but also digging up neglected photos of other wildlife from earlier trips. If you are interested in checking these out, you can do so via the thumbnails on the Recently Added Photos page: http://www.birdway.com.au/recent_additions.php.