This started as a joke, expanded into a virtual world duck finding tour and ended up with a good news story - all things we may need at the moment.

I have a friend who has a problem with, how shall I put it delicately, anger management. So I suggested she should imitate the proverbial Water off a Duck's Back and I sent her by way of illustration three photos of a sanguine female Red Shoveler in Chile (Birdway).

1. Male Red Shoveler in Chile has manic look in his eye copulating with and nearly drowning female who's thinking mindfully of England, sorry Neptune 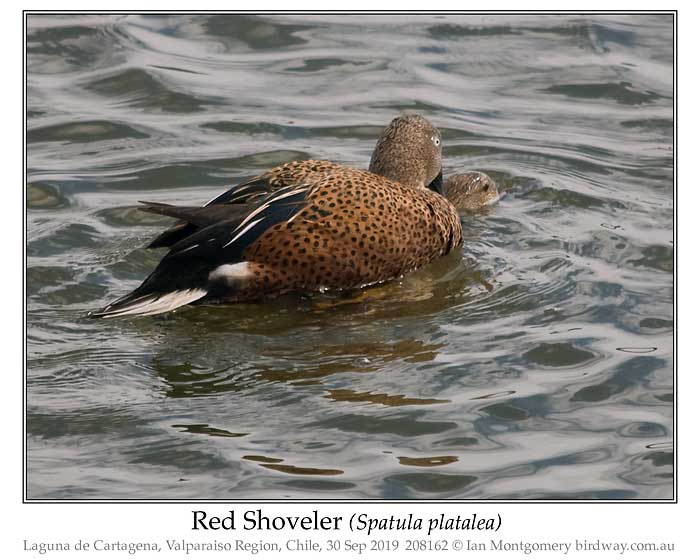 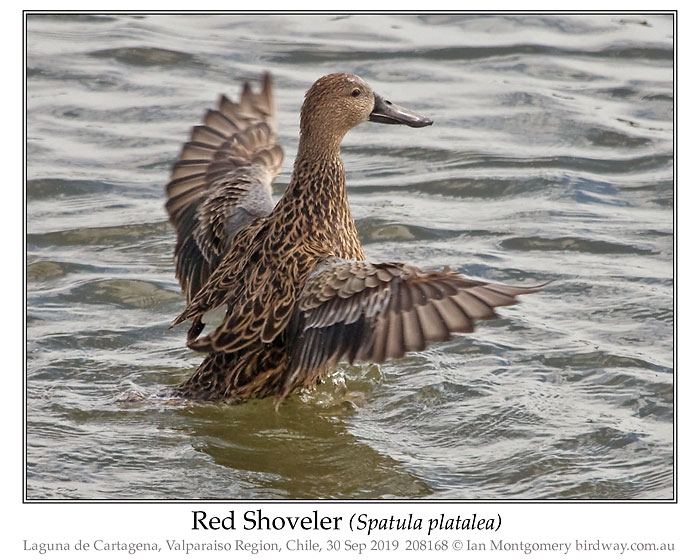 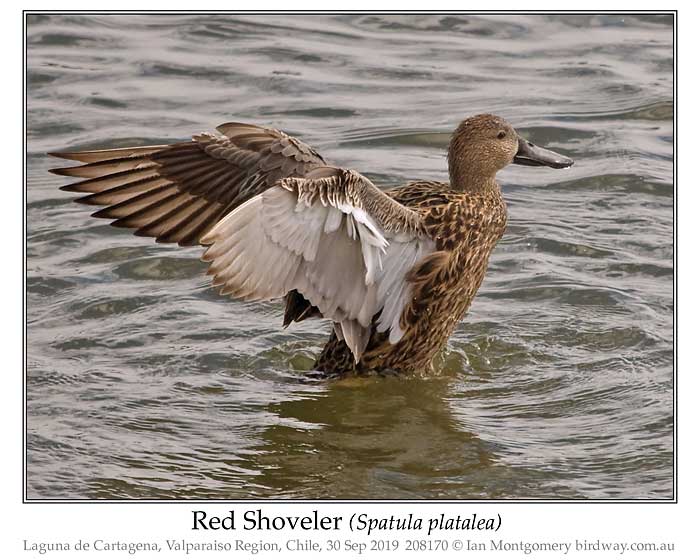 Punch line: So 💕 count to sixteen, think of England 🤔, shake your feathers, dismiss what's happened 😀 and do something worthwhile 🌾. 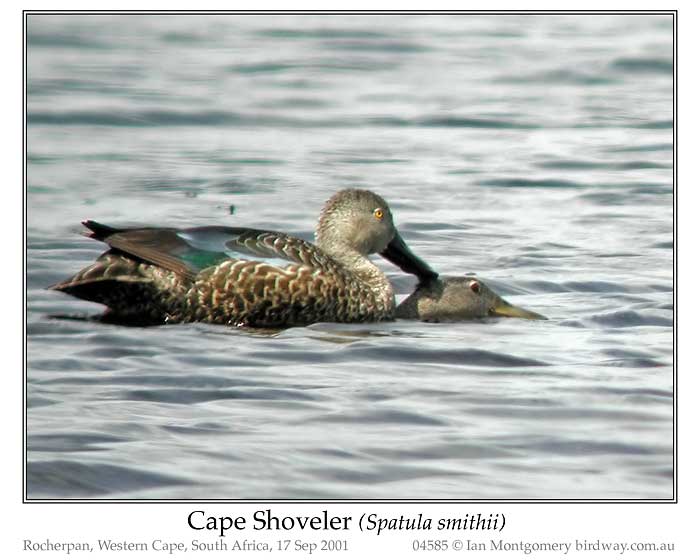 After I'd decided to make it into an Irregular Bird for April Fools Day, I remember that I had photos of Cape Shovelers in South Africa (Birdway) doing exactly the same thing. 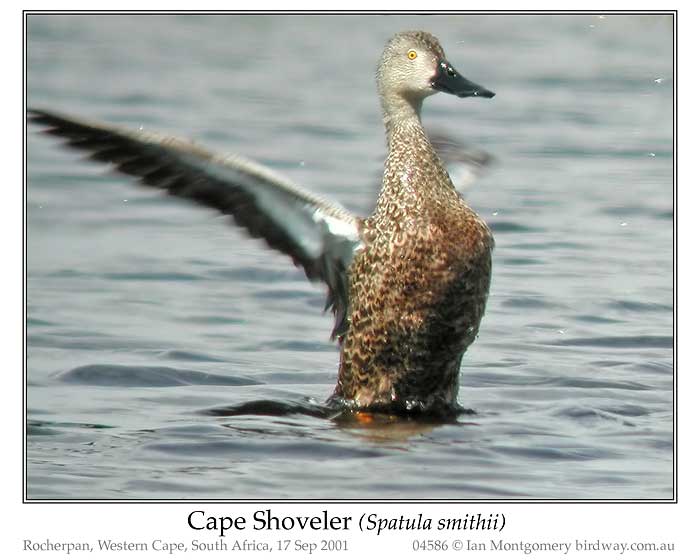 The female Cape Shoveler took only six seconds to reach the same stage, so she's obviously experienced. I can't work out though whether the look in her eye is shell-shock or ecstasy: a female Shoveler plays her cards close to her breast. 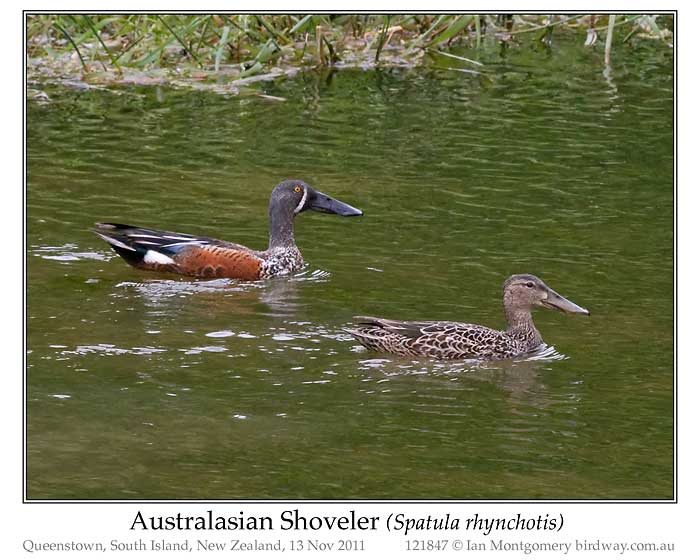 I decided to check out the other species of Shoveler. There are only four actually called Shoveler but with the most recent re-organisation, or dis-organisation of duck taxonomy, there are six other species in the same genus such as the Blue-winged Teal and the very smart Cinnamon Teal. Ducks are careless with species boundaries, names and genders, and inter-specific hybrids are as common as in orchids, another group with slack morals. This pair of Australasian Shovelers is, in contrast to the Red and Cape Shovelers, looking very demure, maybe because they're New Zealanders, because the weather is cold, or because they're distancing socially. The female looks quite content, almost smug, the male less so. 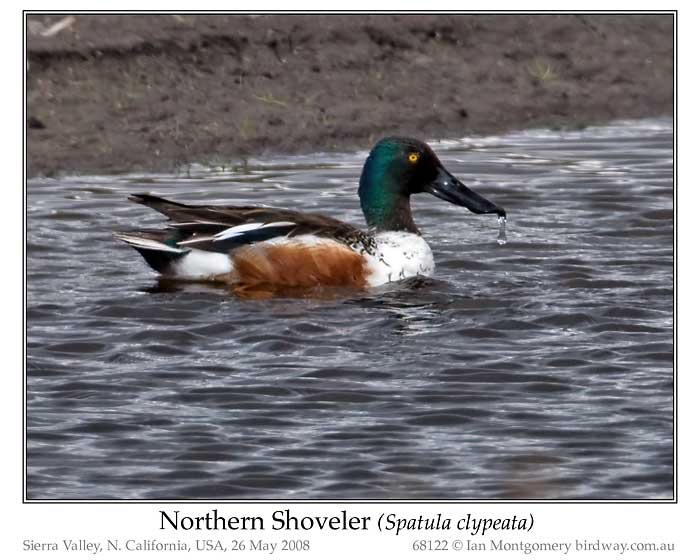 This male of the fourth species of Shoveler, the Northern, in Northern California, is drooling over a female just out of the picture. If you don't believe me there's a photo of her here (Birdway) taken just four seconds earlier. 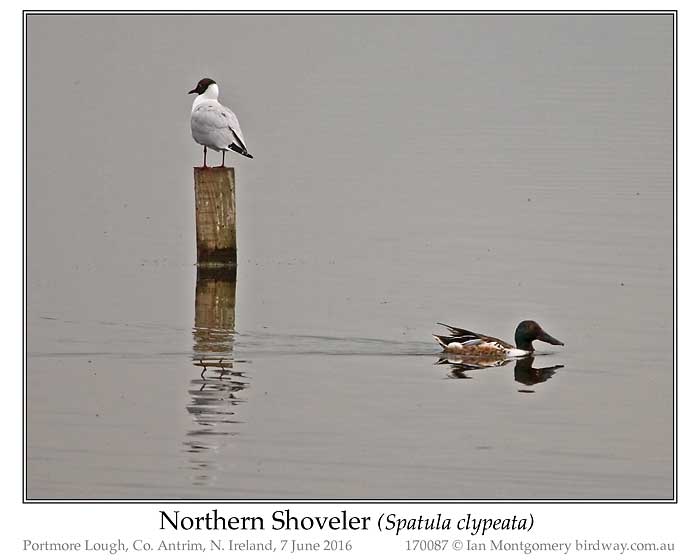 Here's another demure Shoveler, also Northern but in Northern Ireland rather than Northern California. Presumably that's why they're called Northern Shovelers and why we have Northern Fantails (Birdway) in North Queensland (they're also under quarantine restrictions).

This one's not doing anything social. This is because the breeding season is over and he's starting to change to the eclipse plumage (like that of the female) which shows that his testosterone levels are dropping. You can see mottled plumage developing on the side panel that is otherwise a beautiful rufous colour like the previous male at his hormonal peak.

The Northern Ireland male, like many of his countryfolk, has an artistic streak, has spotted the photographer and is creating a lovely composition with a bored and unimpressed Black-headed Gull (Birdway), so named, by a naturalist without binoculars, because they have dark brown heads when they're breeding and white ones when they're not. 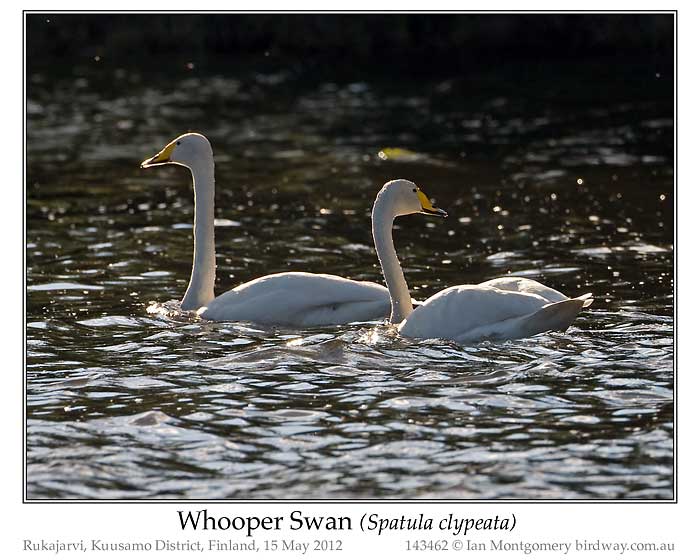 That set me thinking about swans and whether female swans are in danger of drowning from the attentions of large and heavy males. Clearly that's why they have long necks, not for feeding but as a snorkel. Here is a pair of Whooper Swans in the breeding season in Finland. Clearly the female is the one with the long straight neck, no spring chicken this one and she has been forced to do neck-stretching exercises for years. You can tell the male both by the curved neck (from repeatedly holding females on the nape) and by the fact that he's looking over his shoulder at another swan of unknown gender. Members of the duck family are notoriously gender fluid and in Whooper Swans that is down to an erotic choice between straight and bent necks. 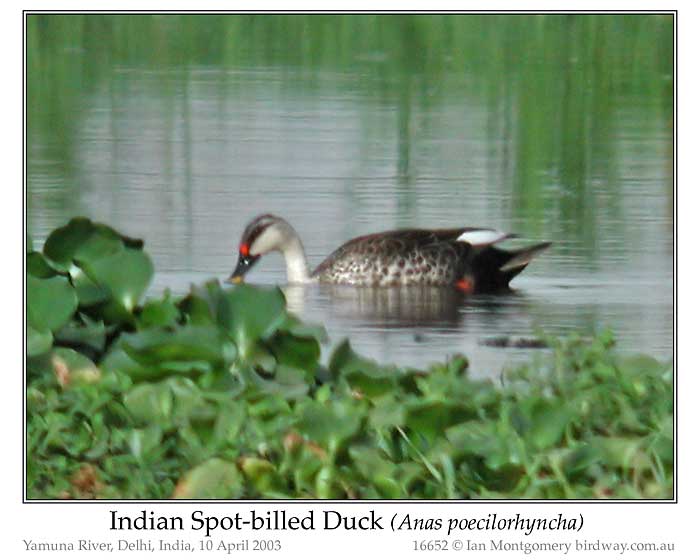 When I got to this point in the story, I realised that we'd travelled to every continent except Asia and Antarctica so I though we may as well continue, seeing as we're presently mostly under house arrest and imagination can run riot. I had a lot of trouble finding a photo I'd taken of a native duck in Asia, but I eventually found this Indian Spot-billed Duck, though to be a close relative of the Pacific Black Duck of Australasia and Indonesia. Unusually for a resident of the sub-continent it's rather anti-social. 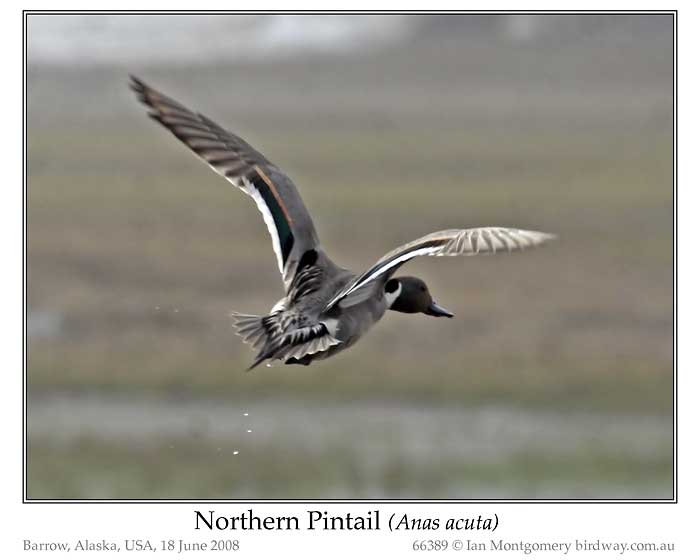 Here is my most northerly duck photo, a Northern Pintail taking off over the tundra in Barrow, at the most northerly tip of Alaska. Northern Pintails were one of my favourite duck species in Ireland as a teenager as they're very sleek with long necks and tails and subtle rather than loud colours. We used to see them on the North Bull, a bird reserve at the northern end (of course) of Dublin Bay. They're also common on the North Slob, a reserve in County Wexford. 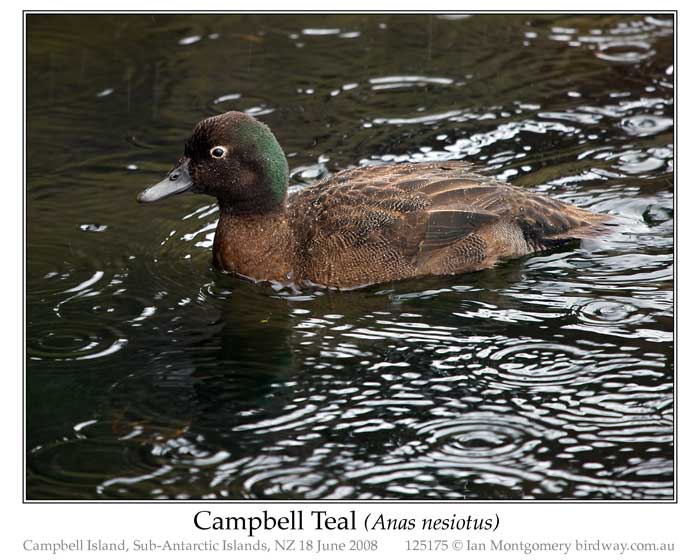 The Campbell Teal is my most southerly duck photo. Campbell Island is the most southerly of the Southern or Sub-Antarctic Islands of New Zealand. There being no predators before humans introduced rats, the local ducks didn't bother to fly and became flightless, nearly becoming extinct as a result of the rat baby boom and surviving only on a tiny, rat-free, 23 hectare/57 acre offshore island called Dent with only about 25 pairs surviving in 1998.

Campbell Island was famously restored to its original, rat-less, glory subsequently by the removal of feral sheep and cattle and by the poisoning of the entire rat population by dropping huge quantities of rodenticide from helicopters. This was accompanied by a captive breeding program of the Cambell Teal in New Zealand, the establishment of a temporary feral population on Codfish Island (off the South Island) and their reintroduction to Campbell Island in 2004. The population is now 100-200 individuals, is increasing and its IUCN Red Book status has improved from Critically Endangered to merely Endangered. You can read the story on BirdLife. So that's our good news story, and, even though it's April Fools Day, I don't think I've stretched the truth too much, though I might have taken liberties with swans.

PS A reminder that the free ebook offer for the pandemic continues on on my website Birdway and on Payhip. So if you still want to download them, give them to friends, ot tell other house-bound people, this is your chance (just share the link http://www.birdway.com.au/publications.php). If your not into ebooks yet and the local library is closed or out of bounds, this is a good time to start and there's a Quick Guide to eBooks on the publications page of the Birdway which should give you enough information to get started. 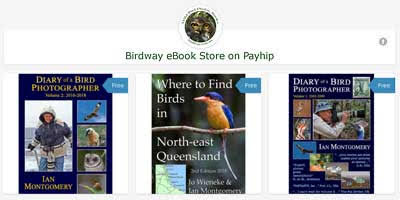