Bird number 600 after 18 years is a bit of a landmark, so here is something suitably celebratory: the best dressed award for the South American trip: the Bare-faced Curassow. They also win the worst named award as I have to think every time I write it so I don't say 'assed' but that's probably a reflection on me, not the species.

If you can think of any categories I've left out let me know using the email link at the very bottom of the page and I'll see what I can do in the next Irregular Bird. A former colleague of mine, the world expert on the different pelagic behaviour of right- and left-footed thongs/jandals/flipflops recently called it Bird of the Undefined Time, which I like very much and set me thinking, but I'm going to settle on The Irregular Bird. 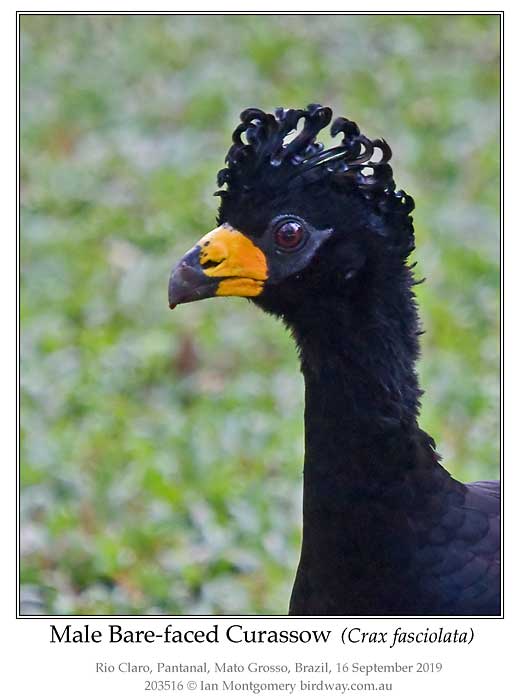 The Curassows also won the best hairstyle award so I'll deal with that first. The male's is all black, quite original in a dapper and restrained sort of way, very suitable for evening dress/tuxedo. The female couldn't resist a two-tone look, also restrained and very dignified. I think the black curly tip on a white base is gorgeous and the little black fringe/bang is the perfect finishing touch. Both have the suitably haughty look of famous models and you might be surprised to find that this male is married to this female: it could be an interesting household with two prima donnas, even before any kids come along. 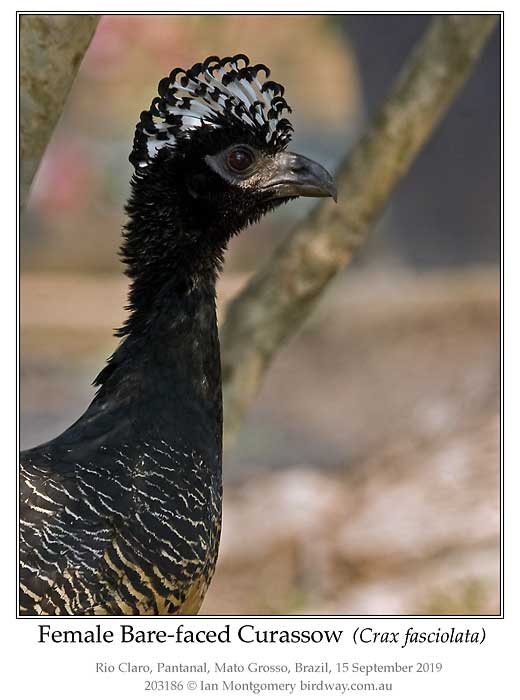 Here's the male in his dinner jacket/tuxedo on the way to the Rio Claro masked ball. He's wearing a special yellow face mask which doesn't cover his eyes. It's partially for epidemiological reasons but fame is important to him and he wants everyone to recognised him and know that he too was invited to this special event. Very suave and practising his red carpet walk, but he doesn't really need to as he naturally has the sort of elegant, pouty walk that is widely admired on the cat-walk. 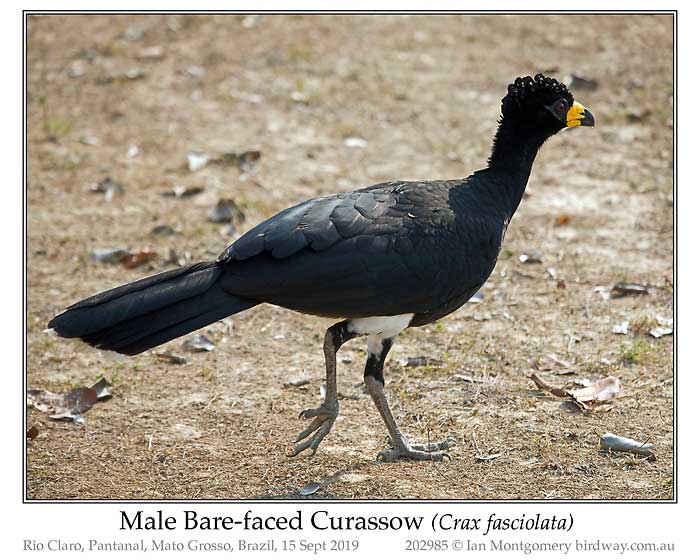 The female is waring a tan-coloured silk ball gown with a brownish black cape and train. Both of these are hand embroidered with stripes consisting of thousands of large pearls and diamonds. Consequently they're rather heavy and she hopes she doesn't trip or fall on the way and is secretly looking forward to discarding them with a flourish in front of the cameras of the paparazzi. She's walking past the resort swimming pool on the way to the ballroom. Those of you familiar with Australian flora will recognised the trunk of the tree and the leaves on the ground as belonging to a rare species of Eucaplyptus specially imported at great expense from a boutique nursery in Humpty Doo, 40km from Darwin in the Northern Territory, a small town better known by ordinary folk for its barramundi (an over-rated freshwater fish with a wonderful name). The climate there is similar to that in the Pantanal, hot and dry for much of the year with a very wet wet season. 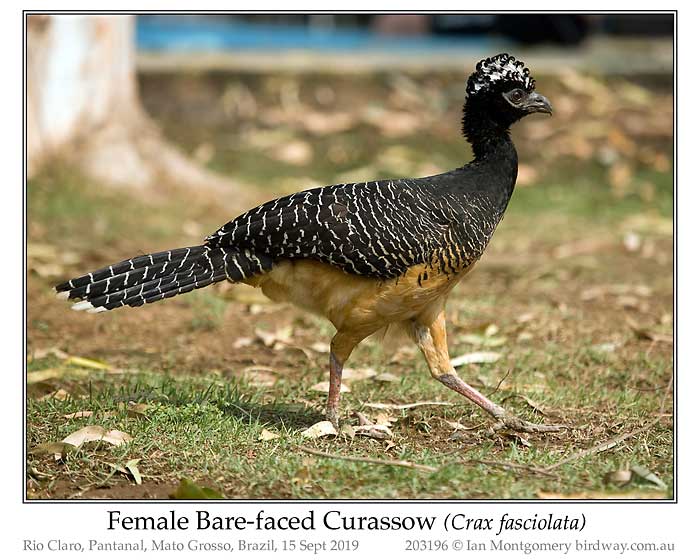 Masked balls can lead to unexpected results and this mother Curassow is paying the price. She sadly remembers the party times well, don't we all, but is quite fond of her two chicks. She's pleased to have both a daughter (centre foreground) and a son, trying to hide under mother's skirts in the background on the right. He is already sporting a yellow face mask like his dad, is developing a precocious crest and wearing a black waistcoat, unbuttoned to show off his tan. Curassows are vegans naturally, and these ones are looking for the seeds of some super-food they've been told about. They also visit salt-licks as they believe that it's makes their plumage very lustrous. It also leads to high blood pressure but they are young and don't worry about such matters.

Bare-faced Curassows range through central Brazil, eastern Bolivia, most of Paraguay and northern Argentina. Like the rest of us they are regarded as Vulnerable, but for a different reason, as they suffer from hunting by left-wing elements (Curassows vote for Bolsonaro). They are extinct in Rio de Janeiro as they found the Carnival much too vulgar, or maybe too competitive, and moved to the provinces particularly the Pantanal in Mato Grosso, a well-known retreat for the rich and famous who surreptitiously but enviously eye the coats of the local Jaguars.

Like all news now whether official or on social media, subject this article to the scrutiny of your b*llsh*t meter.

PS Here is the only prize winner that hasn't yet made it to the website. I must rectify that today. They're king of the Iguanas, very large - to two metres long, perfect for social distancing - with a noble heritage having been described by Carl Linnaeus in 1758, during the reign of Louis XV and when the United States were still British colonies. Like Louis XIV and Bare-faced Curassows, they're into extravagant balls. This one is lounging on a freshwater beach on a sunny day near the fashionable resort of Porto Jofre in the Southern Pantanal, improving its green 'tan'.