Because it's so long since the last irregular bird, here is a special one of a very rare wader that has become something of a celebrity, perhaps the most photographed individual bird in Australian history. So you may already have superb photos of it, and I apologise in advance if you find this boring. Nordmann's Greenshank is, sadly, one of the rarest waders in the world with a population of probably less than 2,000 individuals and a red book status of endangered as its population is declining. 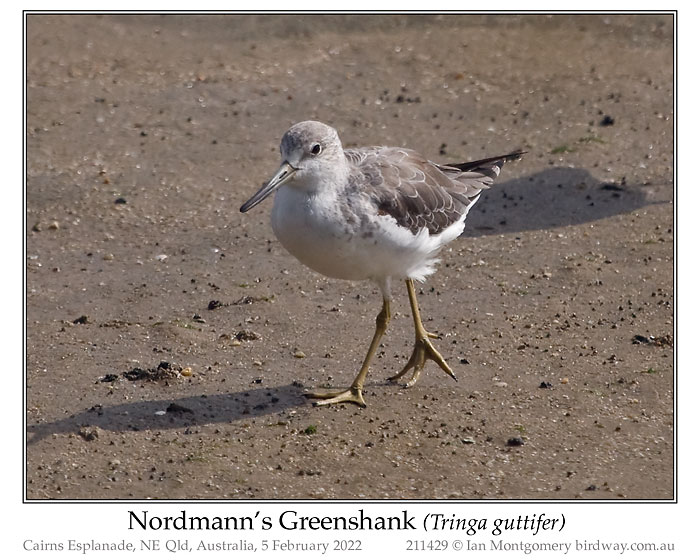 Its breeding range is along the coast of the Sea of Okhotsk in Siberia, and is subject to disturbance from oil and gas extraction. It normally winters in southeast Asia and, very occasionally, birds end up in Australia. There are three records from wader counts along 80 Mile Beach near Broome in NW Western Australia, and this one. It first appeared in Cairns in the (northern) winter of 2021 and stayed around long enough for anyone able to navigate covid restrictions and see it. I couldn't drive to Cairns then and resigned myself to the prospect of missing out on it. To everyone's surprise, it reappeared this year and the scramble to see it started again. 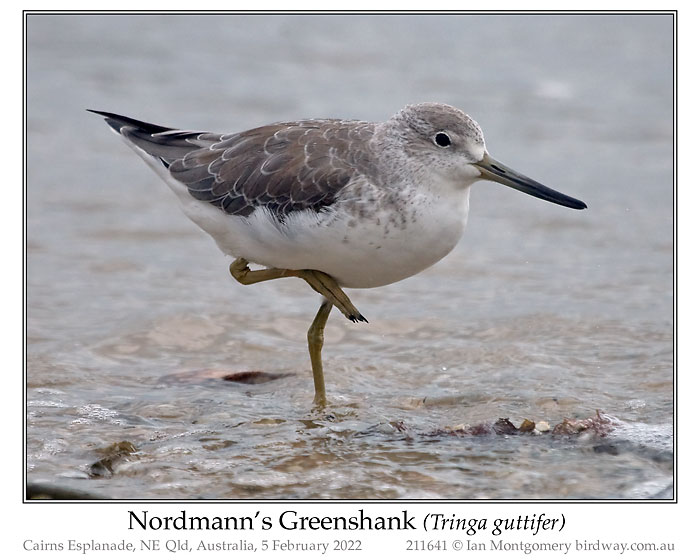 I drove the 340km/210 miles to Cairns at the end of January to catch up with some good friends of long standing from Victoria. They were on the hunt for it, in airline transit from a boat trip to Torres Strait islands to Iron Range National Park on Cape York. We spent four days checking every wader along the Cairns Esplanade at suitable and sometimes unsuitable tides without success. It definitely wasn't there, but reappeared when they had gone to Cape York and I had returned to Townsville. I rejoined them in Cairns for two days, when it did its disappearing act again, only to reappear for them after I'd returned to Townsville for a meeting that, in hindsight, I deeply regretted attending. so I dropped everything again and returned to Cairns, determined to see and photograph it. 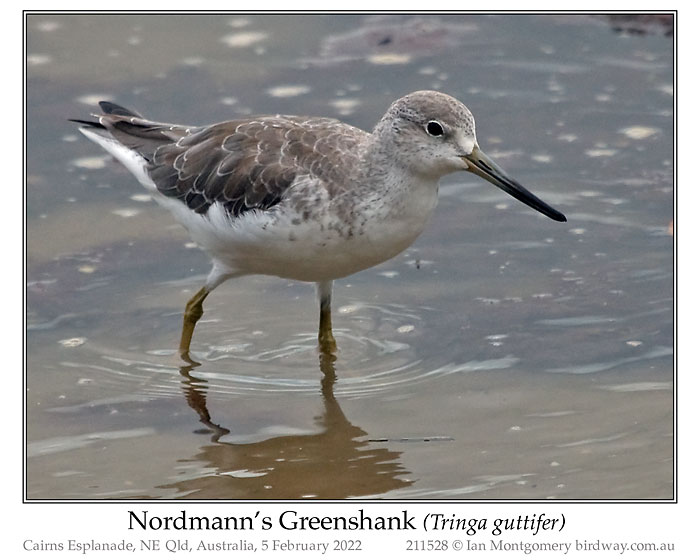 On the second morning of my third visit, the bird relented and I spent an exciting two hours as the incoming tide slowly coaxed it closer and closer. Ultimately, I ended up sitting a mere 6m/20ft from it on the sandy edge of the mudflat, second photo, having taken more than 400 photos. I'll talk about obsession later. Then I rang Trish, the friend with whom I went to Brazil pre-Covid, who was flying from Brisbane to Townsville that afternoon and suggested she fly to Cairns instead. Which she did, changing her flight at the airport, and we got lovely views of it the following day. We also visited the wonderful Bill Cooper exhibition of tropical bird and fruit paintings at the Cairns Gallery. 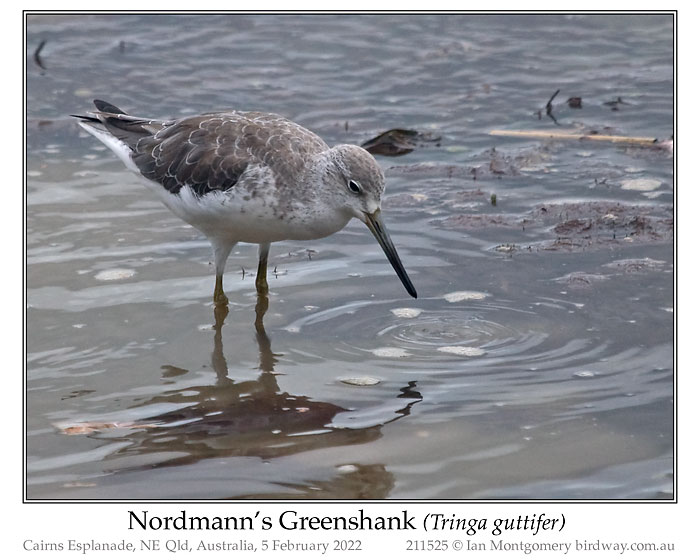 Trish suggested bringing our painter/birder friend Marjory and a botanist friend Chrissa to Cairns to see the bird and the exhibition before the latter finished on the 13 February. So we came up again at the weekend, this time in her larger, more comfortable car and saw both the exhibition and the bird yet again. What fun 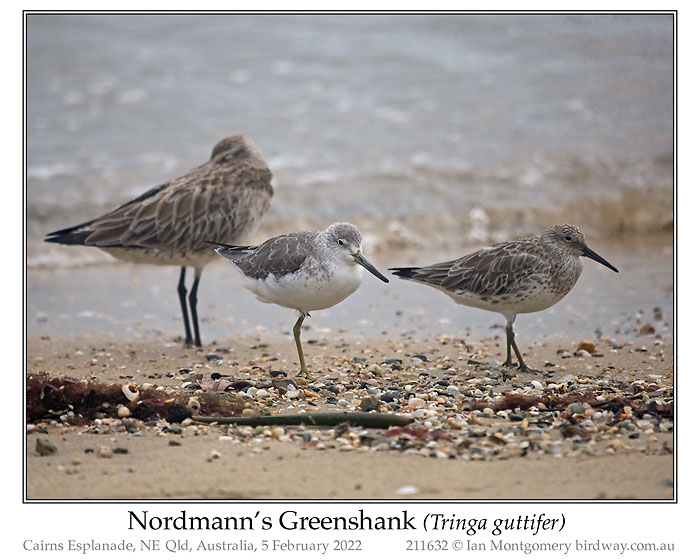 Time to mention the bird itself. It looks quite similar to the Common Greenshank and, slightly less so, to the Terek Sandpiper, both of which were present along the Esplanade. The first photo shows some of the diagnostic features: shorter, yellowish rather than greenish legs, the more robust bi-coloured bill (paler at the base) and shorter legs and bigger head ('bull-headed') which give it a rather stocky appearance. It's behaviour when feeding is different too, and when one becomes accustomed to it, this is a good distinction at a distance, with poor light or muddy legs and bill. In the third and fourth photos it is feeding actively in shallow water, attempting to catch prey with a stabbing motion. It also uses its slightly upcurved bill to sieve the water surface by sweeping it back and forth, in a similar way to other waders with such bills such as the Terek Sandpiper and the Avocets. The fifth photo shows its size relative to a Bar-tailed Godwit, left, and a Great Knot, right. 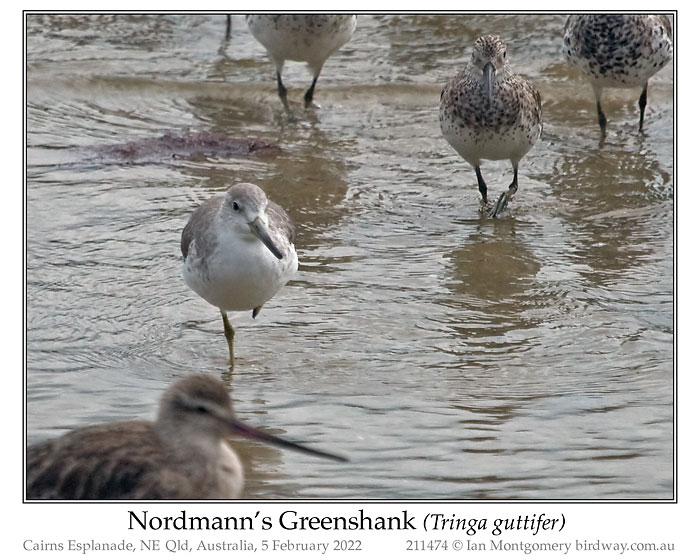 The second photo shows it standing on one leg, a pose it adopted often using one or the other leg, when resting or roosting (second and fifth photos) and when forced by the tide to move, it often hopped quite long distances to do so, sixth photo. In flight, last photo, the shorter legs protrude less beyond the tail than those of the Common Greenshank, it has less barring on the tail, whiter underwing coverts contrasting with dark flight feathers and it look stockier. Not much is known about its breeding habits, though it's the only shorebird known to often build its own nest in trees. unlike its tree nesting relatives the Green and Solitary Sandpipers which use old nests of thrushes. 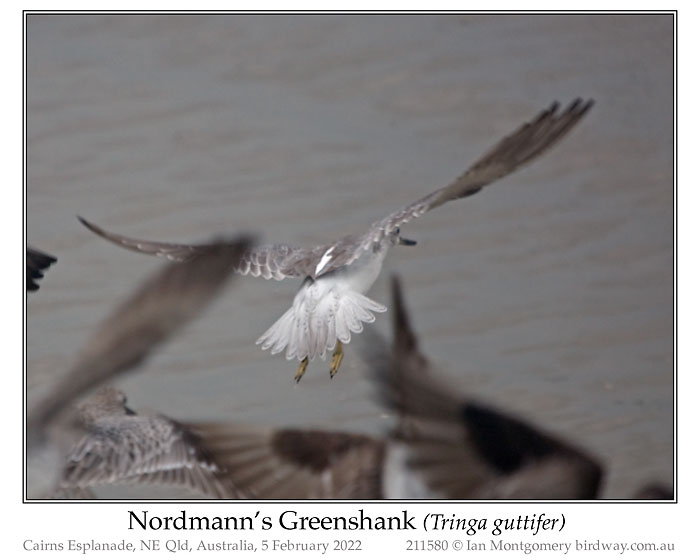 This whole saga has revived my interest in bird photography, which rather flagged during Covid, when I took up other interests less dependent on mobility. It was also a time for personal honesty and admitting my twitching tendencies to myself rather than hiding behind the more dignified facade of a wildlife photographer. Next time, I'll talk a bit more about the joy of twitching and explain why getting photos of this particular species was so important for me. I'm still pondering the difference between a passion and an obsession.