For the New Year we had the hopeful Wise Owls. Well, 2020 is less than three weeks old and it's been a bumpy ride already in various parts of the world such as Australia and Iran. So the current bird of the moment is the Spangled Drongo. Anyone familiar with Australian slang will know that Drongo is used in Australian English as a mild form of insult meaning “idiot” or “stupid fellow” (“stupid eejit” in Irish English). Very unfair to the birds you might think - Drongos are far from stupid - but in fact it is derived from an eponymous racehorse in the 1920s that never won a single race out of the 37 in which it was entered. I'll finish this post by nominating my human New Year Drongo. 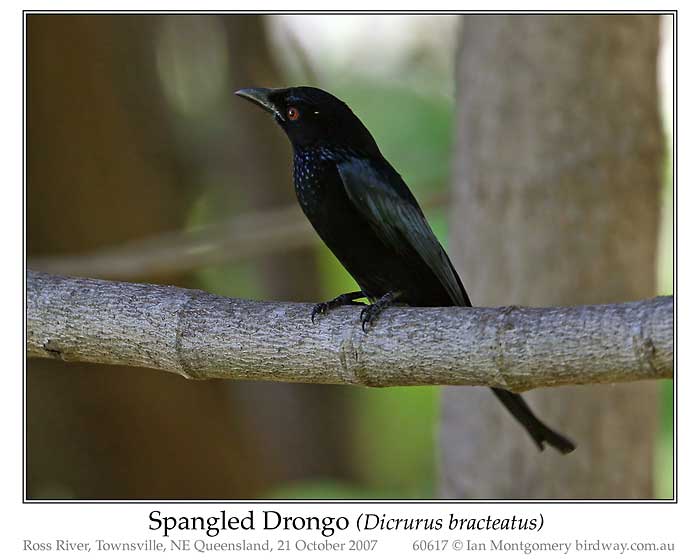 We'll start with the birds. The Drongo family (Dicruridae Birdway) consist of single genus with 26 species in Africa south of the Sahara, tropical and sub-tropical Asia and Australasia. The Spangled Drongo is the only one occurring in Australia and its range includes New Guinea and the Moluccas of eastern Indonesia. In Australia it occurs mainly in coastal tropical and sub-tropical regions from the Kimberley in Western Australia, through the Top End of the Northern Territory to Queensland and eastern NSW. It is a summer visitor in the southeastern Australia as far as Victoria and eastern South Australia, but breeds mainly north of 31°S (Port Macquarie, NSW).

It is a fairly typical Drongo species, 30cm/12in long, with black plumage, an evil-looking red eye, a predatory beak, and a forked tail. In the Drongo family, there are only two exceptions to the black plumage rule: the Ashy (Birdway) and White-bellied Drongo. The forked tail is mainly used for acrobatic flight - like Kites - in pursuit of aerial prey. Sex, of course, has intervened in their evolution, and some species have evolved decorative tails for display such as the Racquet- and Ribbon-tailed ones. 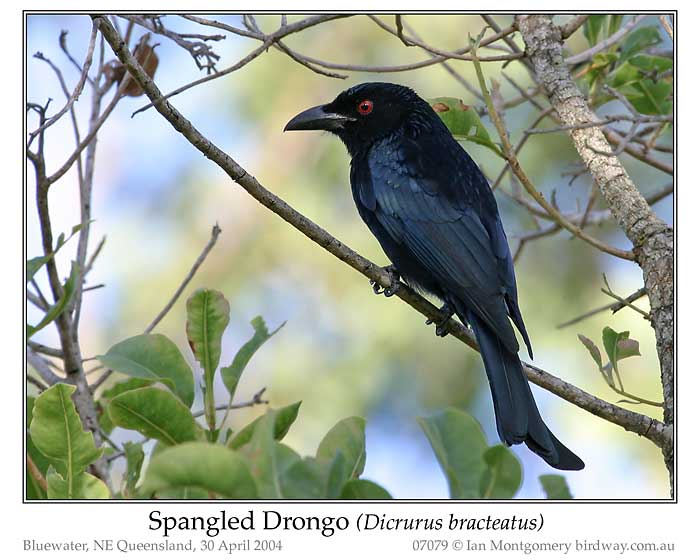 The "Spangled" refers to highly reflective pale spots on the breast but, rather like sparkling hummingbirds, these are visible only when the light is at the right angle (e.g first photo) so birds often appear just black (second photo) with a greenish or bluish iridescence. Juvenile birds (third photo) have white patches on the breast and on the vent. This one is quite young, has a short tail and a “what am I supposed to do now?” expression. 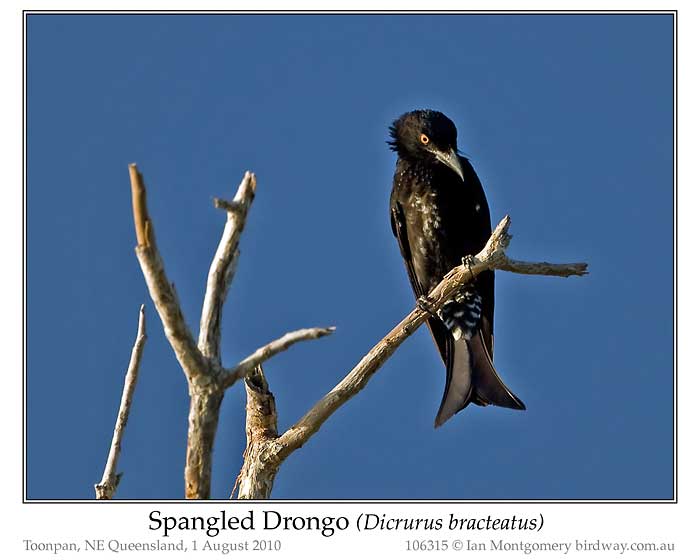 They're loud and assertive birds, perching on prominent sites on the lookout for large insects which they pursue with great agility. From a birdwatcher's point of view, they have a dark side appropriate to their appearance, and will feed on nestlings, like the unfortunate one in the fourth photo. There are a couple in my garden that regularly visit the birdbath and, although I admire their survival skills, I have mixed feelings about their presence. 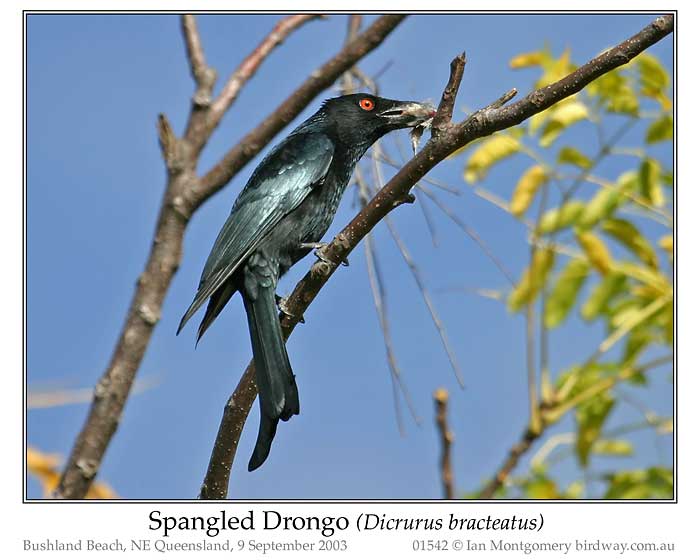 Their assertiveness extends to breeding and they'll readily place their nests in obvious places such as this one on the separation bar of powerlines in a suburban street. This street is grandly called Park Lane, between Bayswater Road and Oxford Street in Hyde Park, a Townsville suburb named, presumably, using the London version of the Monopoly board. (I was brought up on the Dublin version and the equivalent of Park Lane was, I think, Shrewsbury Road at the dark blue, most expensive end.) The nest-building skills of Drongos are impressive. 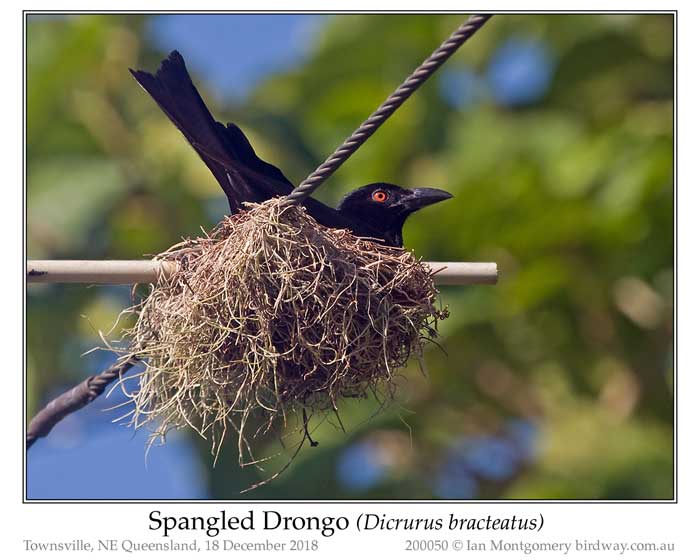 Anyway, enough about mere birds. My Drongo nomination reflects my frustration with the Australian Government's refusal to do anything of substance about climate change not just in Madrid, but especially in the light - or heat - of the catastrophic bushfires in Australia. For once it seems that the media have not over-dramatised the situation, if anything they have failed to communicate adequately the true horror of what is happening. My award goes to Government back-bencher Craig Kelly for this extraordinary interview on Good Morning Britain on British TV. If you haven't already watched it, please do; if it weren't so serious it would be funny.

To end on a more positive note, after the Australian election last May, I made a moral rather than economic decision to install solar panels, on the basis that if the Government wasn't going to do anything then it was up to individuals. The bushfires spurred me into action and I have just signed a contract for installation of a 6.6Kw system. It seemed pity to have a suitable, naked roof going to waste in one of the hottest and sunniest parts of Australia. This is what it's supposed to look like, good Spangled Drongo habitat. 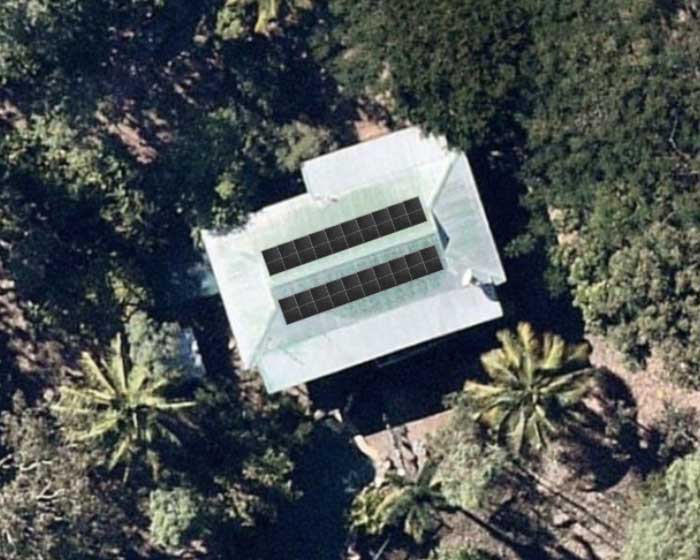 The projections are that the system will generate 11MWh of electricity annually, replacing the equivalent of 3.4 tonnes of coal (allowing for the averages percentages of electricity generated by coal and natural gas in Australia, 73% and 13% respectively) which in turn is equivalent to saving the emission of between 9 and 10 tonnes of carbon dioxide. That's nearly half the average per capital Australian annual emissions, an embarrassing 22-25 tonnes, so I should have done it ages ago.

Meanwhile, under that roof I've been steadily add photos of new species from the South American trip, more than 120 to date and you find links to most of them here: Birdway Additions. I've finished adding new bird species and am adding photos to ones that I've photographed elsewhere and other wildlife such as mammals: Birdway Wildlife. Needless to say the Jaguar (Birdway) is the star of the Mammalian show and I like this one of a female having a drink. 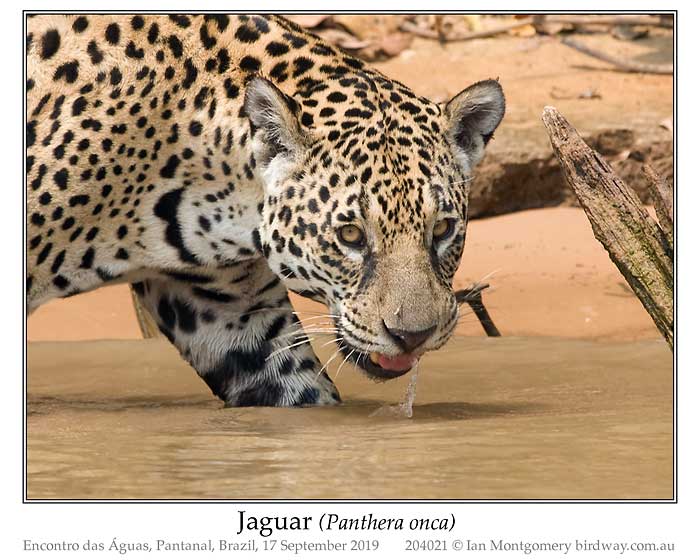 I had a lovely New Year greeting from a Bird of the Moment recipient in Taiwan, and he, Li-Yi Chen, readily agree to my request to share it with you so here is a reduced version of it.

You did of course recognise it immediately as a Black-faced Spoonbill, a rare species that winters in Taiwan. It's the only one of the six species of Spoonbill (Birdway) that I haven't photographed and he's offered to show me it there so I've put Taiwan on my bucket list.

Enjoy the Drongo Photos and feel free to nominate your own New Year Drongo.
Ian