Storks (Ciconiidae on Birdway) are a small, varied, global family of 19 or 20 species depending on whether the African and Asian Woolly-necked Storks are split. Some like the Black-necked Stork of Australasia and Asia are striking in appearance while others such as the Marabou Stork of Africa perhaps qualify as the ugliest birds in existence. 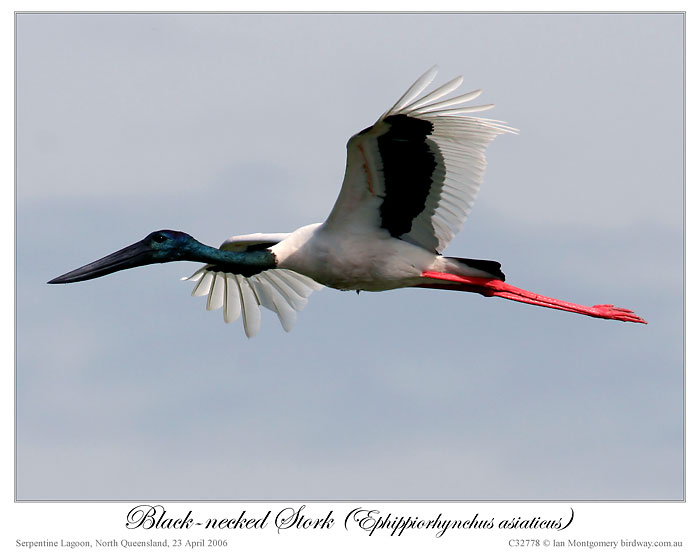 This Marabou Stork, photo scanned from film, is hanging around near a buffalo carcass, killed by lions, waiting for its turn after the vultures have left some scraps it can pick up. Stork bills are designed for spear-fishing, not dismembering carcasses. They also frequent rubbish dumps; no doubt they play an important role as garbage collectors but it doesn't add to their appeal. 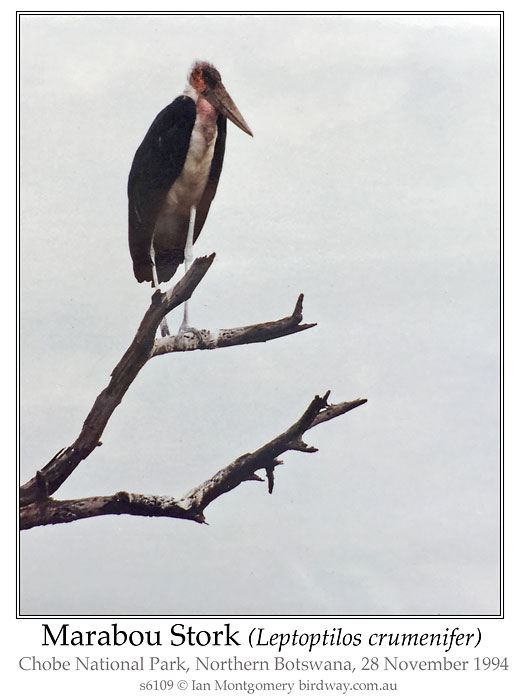 The Jabiru of South America was on the must-see list for the Pantanal and is, I think, bizarre rather than plain ugly, with its naked, swollen, black and red neck. It's also impressive with its huge size, not quite as big as the Marabou but the tallest flying land-bird of the Americas (only the flightless Greater Rhea is marginally taller) and massive black bill. They pay a price for their bare skin. It may be good for personal hygiene but we often noticed that they were bothered by small brown biting flies like the bird below, and often swirled their heads in the water in an apparent attempt to get rid of them. 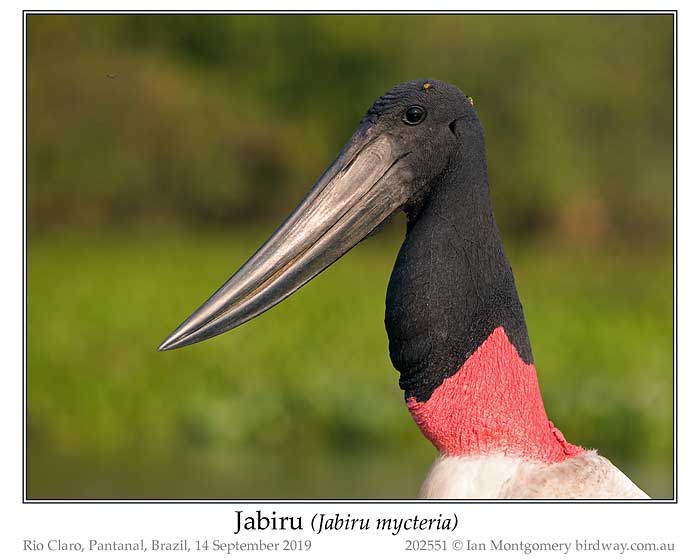 This one we see on our first boat trip on the Rio Claro. We try to convince our boatman that we just have to find a Sunbittern (Birdway) but he has other tricks up his sleeve and we have to wait until the following day before he gets serious about the Sunbittern. This particular Jabiru is accustomed to being fed on frozen piranhas and makes sure we take notice by gliding low over our heads and landing in the water nearby. 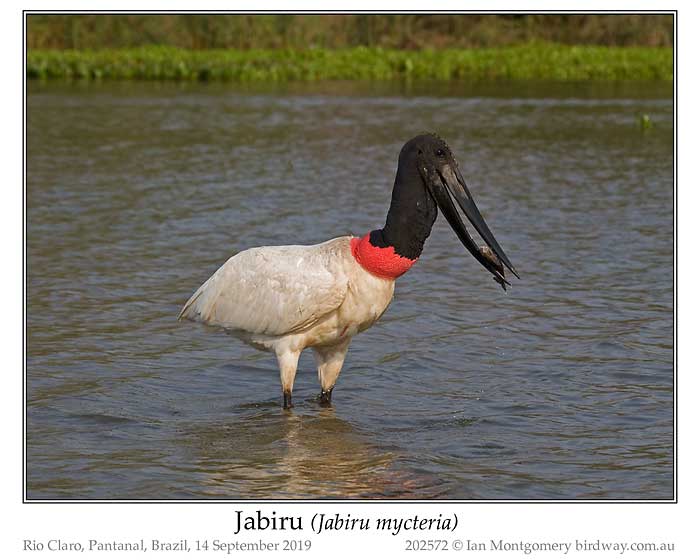 Before swallowing the fish, the bird washes it thoroughly in the water, or so I assume: maybe it is thawing it. I don't suppose swallowing a frozen fish is very pleasant but birds aren't famous for savouring their food and usually just try to swallow it before anyone else gets it or it escapes. 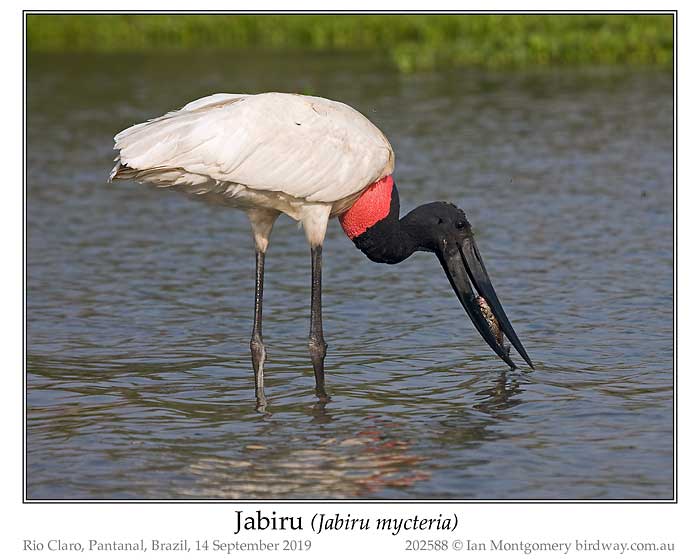 Later in the day we are to enjoy a similar fish-feeding spectacle with a well-trained Black-collared Hawk (Birdway) and a Great Black Hawk (Birdway), so we are well compensated for the boatman's initial reluctance to satisfy our lust for the Sunbittern. 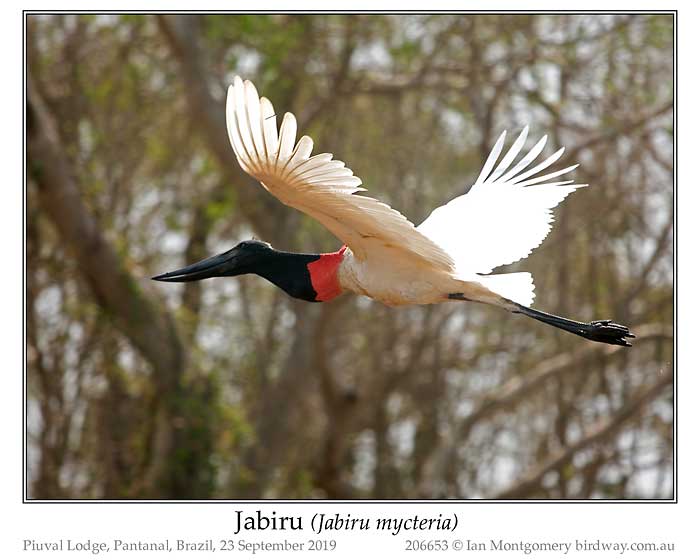 Jabirus are strong flyers even if taking off requires a bit of effort. They are widespread through Central and South America, make local movements in response to the availability of water and food, and are known to cross the Andes in Peru. They are up to 1.4m/4ft 7in in length, with a wingspan to 2.6m/8.5ft and weight up to 8kg/18lbs. Greater Rheas (Birdway) have a similar length but can weigh more than 25kg/55lbs. 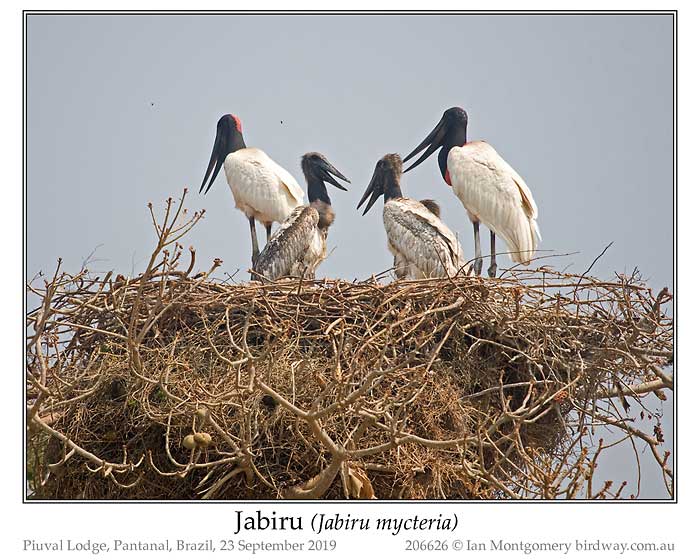 They build huge nests at the top of trees, often palms. The same site may be used repeatedly and the tree, particularly if is a palm, may die. In this nest the two juveniles are nearly fledged though not yet as big as their parents. The adult on the left has a red patch on back of the head: the amount of red on the head and neck is quite variable. I can't find any explanation for the function of the swollen neck, except perhaps for signalling, as the red gets more intense when a bird is “excited”.

The name Jabiru comes from the South American Tupi-Guraní languages and means “swollen neck” and it is used in the scientific name (Jabiru mycteria). “Jabiru” is also used as a common name for the Black-necked Stork (Birdway), the only Stork occurring in Australia. It would seem that the unrelated South American species has a stronger claim to the use of the name, making it preferable to use the alternative name of Black-necked Stork. I don't suppose, however, that the town of Jabiru in Kakadu in the Northern Territory is going to be renamed any time soon.