When a Bird of the Moment recalls a special day out in the field, I enjoy reliving the experience by preparing the article and describing the event. Such was our first full day, a Sunday, in Chile on the return journey. The day dawned sunny and unseasonably warm for Santiago in late September, forecast maximum 23°C/73°F so we decided to look for Andean Condors, our must-see bird in Chile and we are going to take you along with us.

Over a leisurely breakfast we - tired after the long journey the previous day from Cuiabá in western Brazil via São Paolo on the east coast - consult our reliable oracle Google to suggest a good place for the search. The one that sounds most promising is near a place not far away called Farellones in the Andes west of the city at an altitude of about 2,400 metres/7,800 feet. We know that Condors are easiest to find when winds and topography provide suitable updrafts for soaring, so we are a little concerned by the calm conditions as we navigate the steep hairpin bends on the road to our destination. We get there in the early afternoon after a few birding stops along the way. 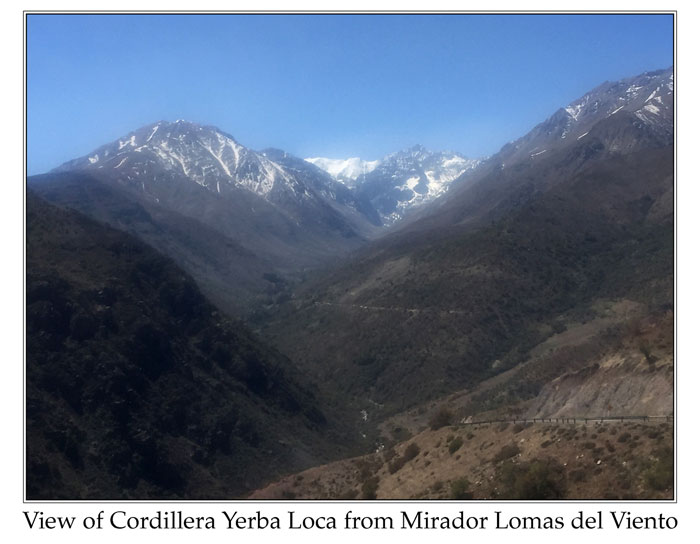 Just before arriving we spot a large raptor, which we think is a immature Condor but we can't stop as we are sharing the road with hundreds of cyclists heading back towards the city and the many vehicles of spectators blocking the down traffic lane waiting to follow the cyclists. We go round another hairpin bend at Mirador Lomas del Viento ('Hills of the Wind Lookout') where we see several Condors soaring both above and below us. Throwing caution and fear of disapproval to the wind we stop blocking, the remaining free lane, to take the first photos. Then we drive on a bit further, find a parking spot and walk back to a good vantage point overlooking Cordillera Yerba Loca ('Crazy Plant Mountain Range'). 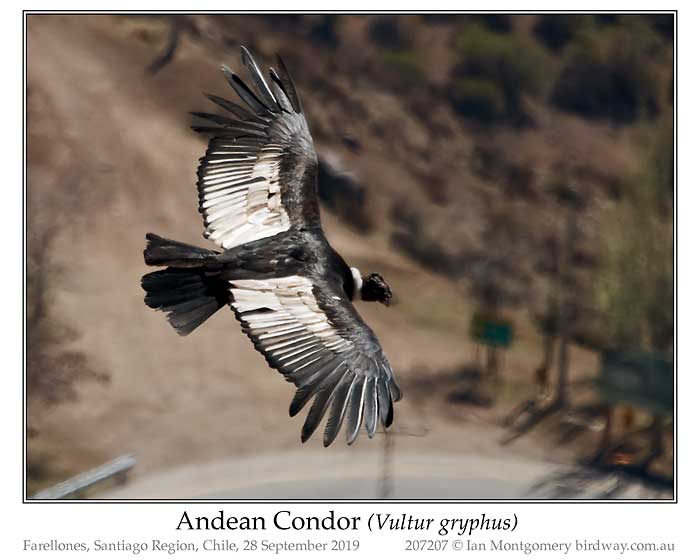 If you look at Parque Cordillera Yerba Loca on the map and at the photo you can see that the lookout is at the end of a 20km long steeply-sided valley running approximately north-south. On such a warm day the breeze is from the north and we have fortuitously chosen perfect conditions for Condors at this place and time where the 'Hills of the Wind' channel the breeze into a steady updraft. Yerba (or Hierba) Loca refers to a high altitude plant called Astragalus looseri, a legume that looks a bit like a purple Lupin in flower, which can tolerate intense sunlight, freezing temperatures and being buried under snow for months on end. It contains an alkaloid, which the literature coyly describe as toxic - supposedly the reason for the name - but we are not convinced. Naturally one, not the plant, would be loco or loca to eat it, but if you Google 'Hierba Loca' you'll find a reference to Dr Stoner's Hierba Loca Tequila, which Hercule Poirot suspects is closer to the truth. 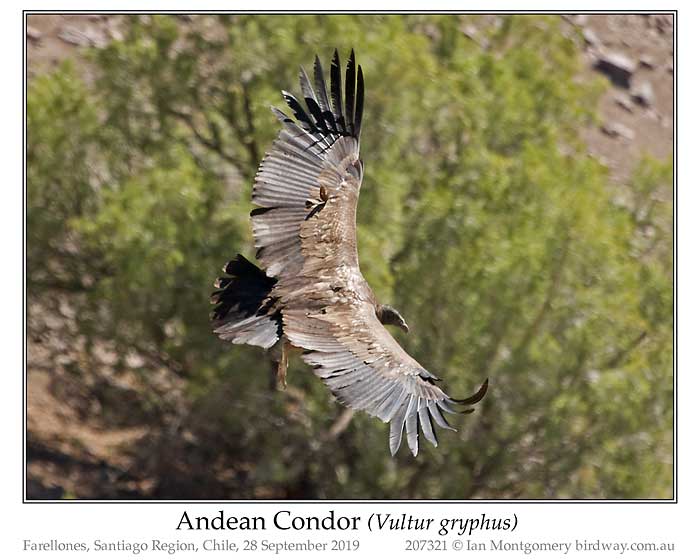 Anyway, back to the Condors. The first Condor photo is of an adult male, the second and third of an immature female. Adult Andean Condors have large white panels on the upper surface of the wing (secondary and tertiary flight feathers), a white ermine ruff, and reddish heads, and males of all ages have crests which grow larger with age. Older males, we'll see shortly also have wattles or flaps on the side of the head. Juveniles and immature birds have entirely brown plumage which changes gradually to the adult plumage at an age of about seven years. 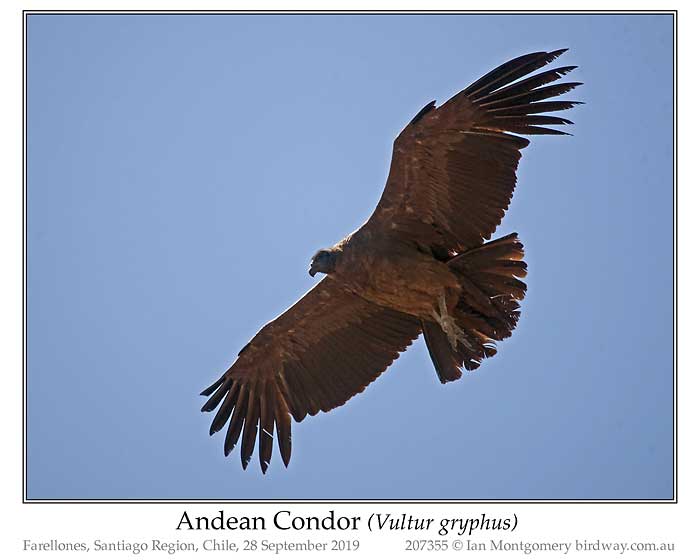 The Andean Condor is the only New World Vulture, Cathartidae, in which the sexes differ in appearance (they look similar in the California Condor). The males with a wingspan to 320cm/10ft 6in and weighting up to 15kg/33lbs are larger than the females which weigh up to 11kg/24lbs. Of birds that can fly, only the Wandering Albatross has a greater wingspan (to 351cm) and the males of some bustards such as the African Kori Bustard weight more (up to 19kg), but the male Andean Condor is the largest raptor, just slightly bigger than the California. It is also unusual for male raptors to be larger than females; it's often the other way round. Female Condor must trust their male partners who share in incubation of the single egg and care of the young. 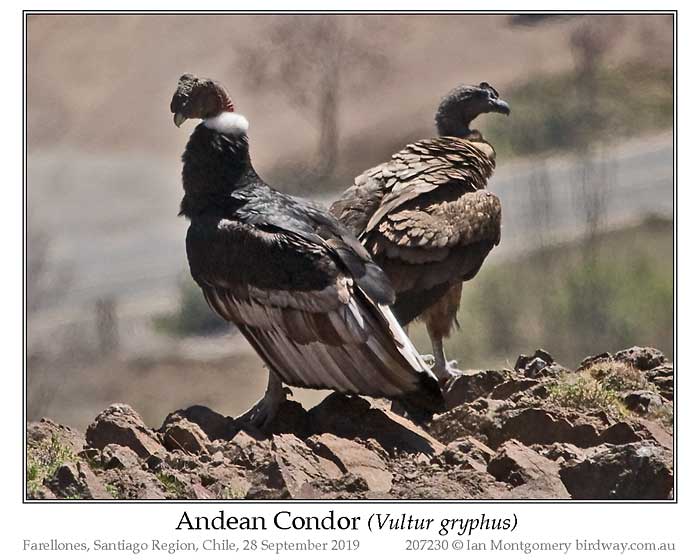 Some of the Condors land periodically on a rocky outcrop just below us (fourth Condor photo). It looks to us like the adults are training the immature birds in flight manoeuvres. Both the birds in the photo are males, the adult on the left having a long crest and the immature bird on the right having a very short one, so maybe it's a father and son pair. Most of the birds we see are males and we wonder why that is so. As the lookout faces north we are facing into the sun so the lighting conditions in the early afternoon are not ideal for photography.

Eventually hunger takes over and we end up in the restaurant of a charming, local ski lodge for a late lunch before returning to the lookout. By now all the cyclists, support vehicles and spectators have left and we have the place almost to ourselves. The number of Condors increases and at some points we can count eleven taking part in this wonderful aerial ballet. The birds are so graceful in the air that it's hard to grasp how large they are until we see close by the passing shadow of a curious bird, flying overhead to check us out like the ones in the fifth and sixth photos. 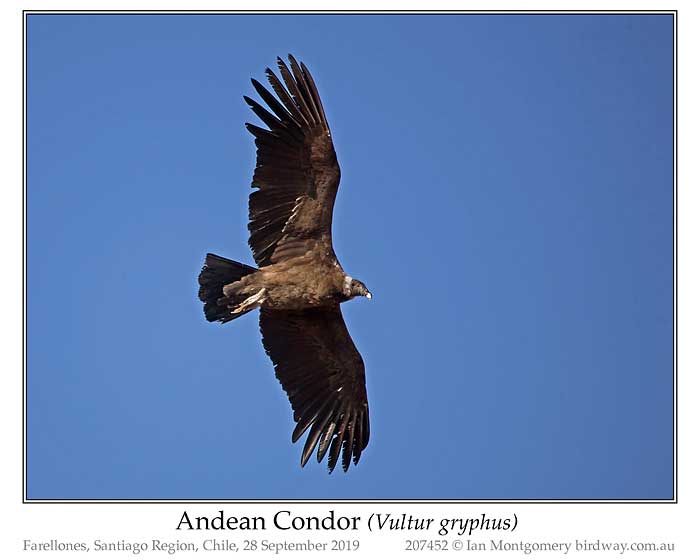 It's now about two hours before sunset and the sun is lower in the west with a softer intensity, much better for photography. The photos are numbered in sequence so you can see that I've taken more than two hundred in the interval between the one of the two birds on the rock and the female in the fifth photo. She is about six years old and is in transition to adult plumage. She has only a faint white collar and the lack of a crest indicates her gender. 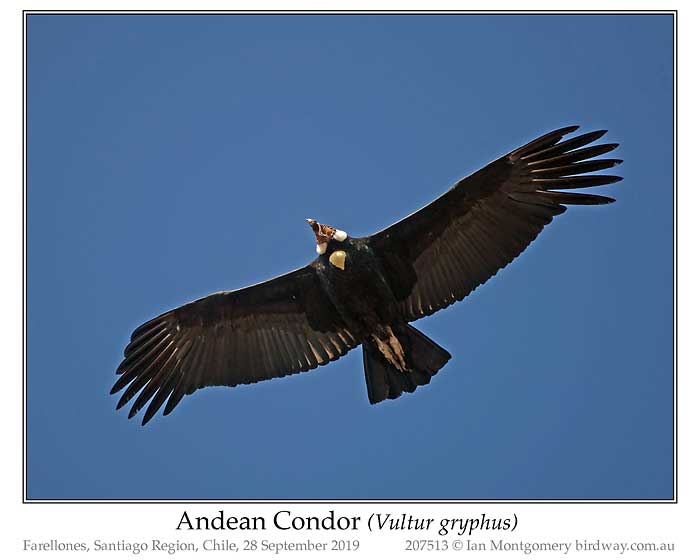 The bird in the sixth photo, directly overhead is an old male with a reddish head and long wattles on the cheeks. You can see that in adult birds the distal edge of the underneath of the flight feathers of the white wing panel on the upper surface are also white. If you look carefully at the right wing of the female in the previous photo you can see that the bird is moulting and five secondary flight feathers with white edges are just beginning to grow and will replace the corresponding completely dark feathers. 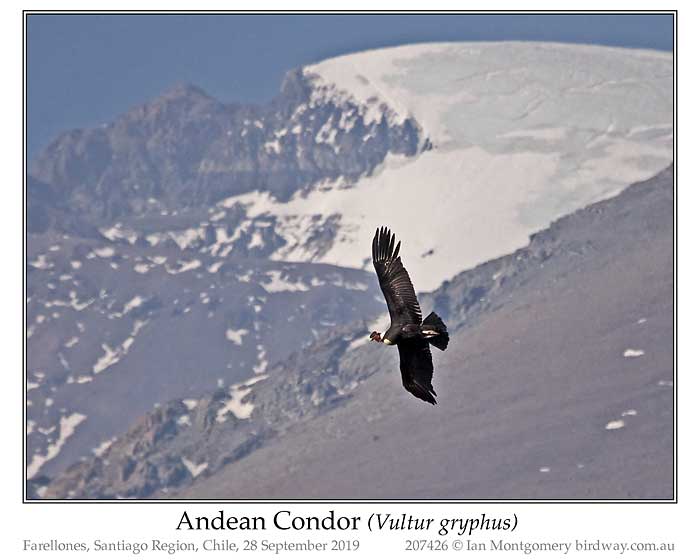 I'm now satisfied with the quantity of photos I've taken so I'm concentrating on trying to get photos of birds with snowy mountains in the background. This isn't easy as the mountains are quite far away and the birds are a bit distant when they have the mountains in the background. The seventh Condor photo shows an older male while the eighth is of a younger male with a second bird behind it. 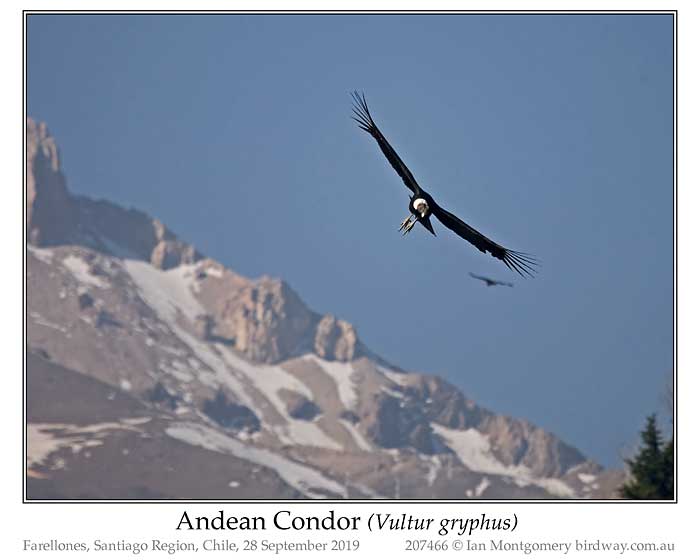 We've had a wonderful afternoon with the Condors, just magic. Eventually we continue up the road to the Valle Nevado ('Snowy Valley') ski resort at about 3,000 metres/10,000 feet. It consists of a number of tall, starkly modern apartment blocks around a largely deserted central car park, the season being over. We park in the visitor parking area - the rest is severely private - and have a wander round. The air is noticeably thin at this altitude. We don't find the resort picturesque, an understatement, so here is the view enjoyed by the buildings on the southern side. The south facing slope still has quite a lot of snow and the sun is sinking in the west after a cloudless day. 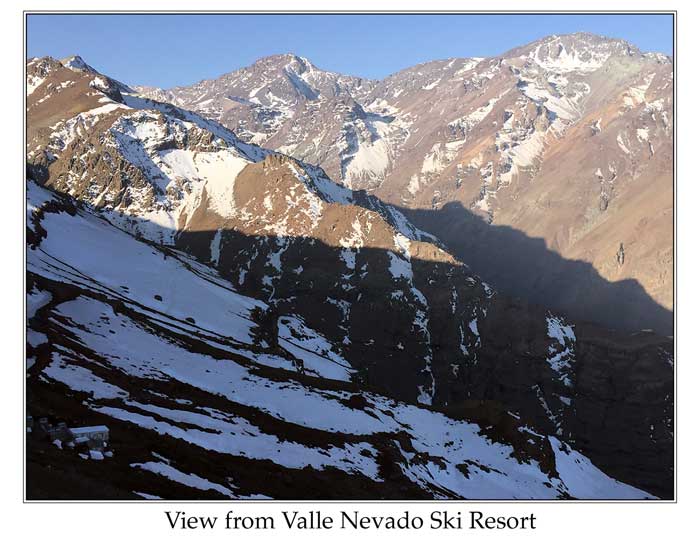 We don't see any more Condors along this route, but we do see a few other high altitude raptors like an immature Mountain Caracara beside the road and a pair of Variable Hawks perching on one of the power poles supplying the resort. Caracaras are in the same family as Falcons but scavenge like Crows. Time now to go back to Santiago before it gets dark after a wonderful day. It's misión cumplida in Chile and we have three full days left for relaxed birding. What would you like to see and where would you like to go? Let's do some wetlands on the coast near Valparaiso for a change: the trip reports on the internet say they're good.