The Pantanal has two iconic species that all wildlife tourists want to see: the Hyacinth Macaw and the Jaguar. Both are spectacular in quite different ways and the Pantanal is the best place to see them. The Pantanal has many wonderful species of birds, but the Macaw is noteworthy as being perhaps the rarest and being now largely restricted in range to this area. Current population estimates are about 6,500 individual wild birds of which perhaps 5,000 are in the Pantanal. 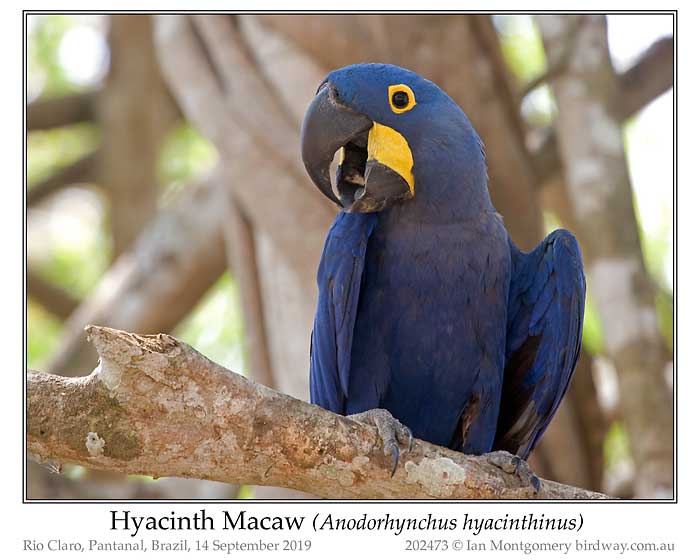 Like the Sunbittern, the Macaw was a must-see bird for us. In fact, it is no shrinking violet, if you'll excuse the pun, being both the largest flying parrot and incredibly noisy. We saw our first ones on the first day, perched on the fence beside the road (the Transpantaneira) and they were present, with breeding sites, at all three lodges where we stayed. They're up to a metre/39 inches in length and weight up to 1,700gms/60oz. Only the enigmatic Kakapo of New Zealand is heavier (up to 3,000g) but is, not surprisingly, flightless. 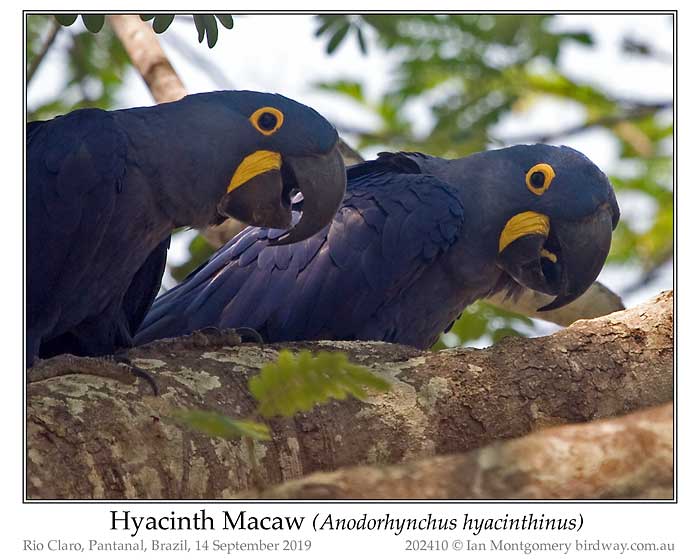 Handbook of Birds of the World describes their voice as "Very loud croaking and screeching sounds including 'kraaa' and screeching 'trara' warning cry": something of an understatement. The first four photos here were of a pair near Rio Claro lodge which first attracted my attention by the noise they were making, which reminded me of a very loud, traditional wooden football rattle. They clearly weren't pleased to see me near what I assumed was their nesting tree, but the shape of their bills gives them a happy, welcoming appearance even if the calls and body language suggest otherwise. 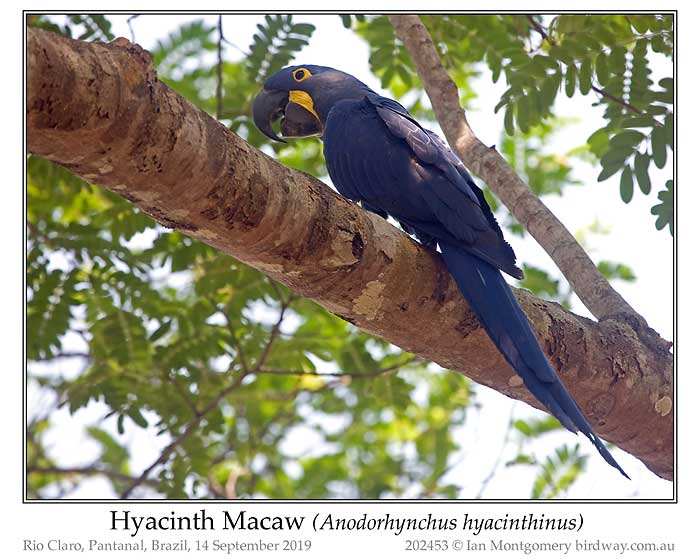 The Hyacinth Macaw lived up to its reputation. It's a beautiful and fascinating bird. The plumage is a striking cobalt blue blending to more indigo on the upper surface of the wings, with the undersides of the flight feathers being dark grey. The plumage contrasts wonderfully with the complementary chrome yellow bare skin on the head, an artistic touch suggestive of intelligent design. Unfortunately, its beauty makes it a popular cage bird which almost led to its demise, more about that shortly. 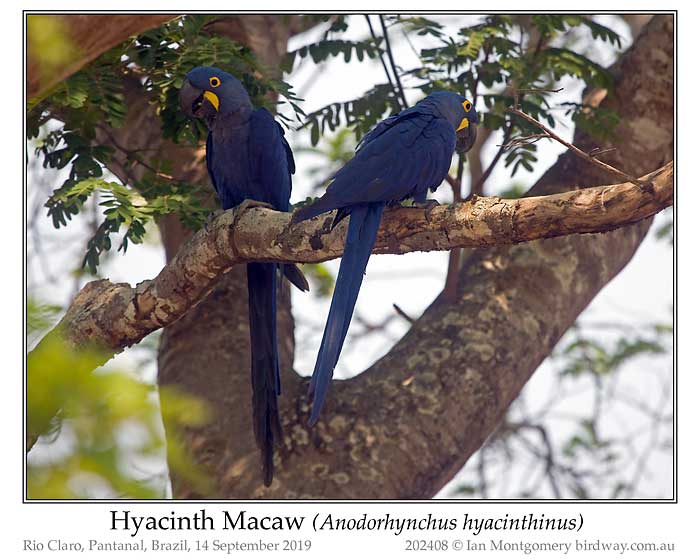 They're monogamous, normally maintaining the pair bond until the death of one partner, so they are often seen in pairs (second and fourth photos). They do not breed until they are about seven years old and have a life-span of perhaps thirty years. In the Pantanal they nest in hollows in trees, usually the Panama Tree (Sterculia apetala). This is a soft-timbered member of the Mallow family (Malvaceae) prone to the formation of hollows from termites, fungi and woodpeckers. The Macaws don't initiate them but enlarge existing hollows as nesting sites, and often use the same site in consecutive years. They will also use the stumps of palm trees and in northeastern Brazil they may nest on cliffs. 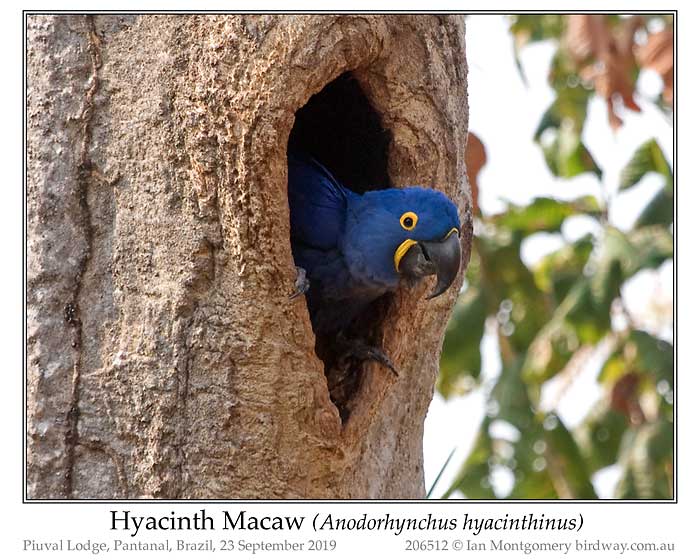 Typically they lay two eggs, but usually at most one young survives to fledging. The eggs and young are particularly vulnerable to predation by reptiles, birds and mammals because of the large size of the hollow and its entrance. Hyacinth Macaws are difficult to breed and rear in captivity for a variety of reasons including the specialised dietary requirements of both young and adult birds. 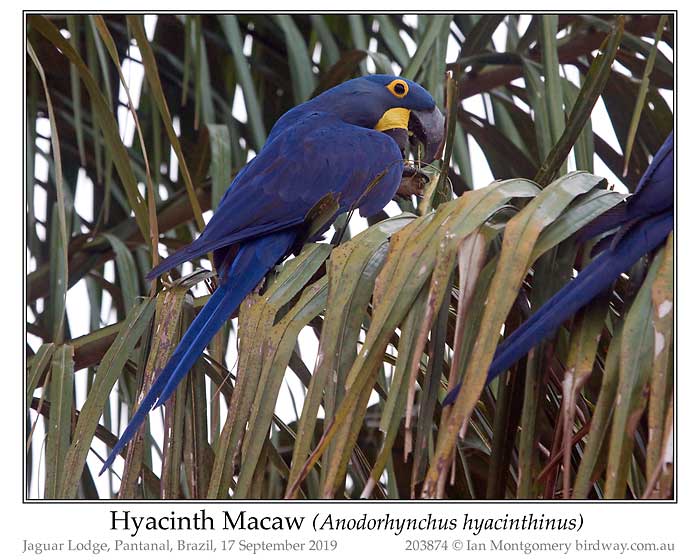 the Pantanal, the birds feed mainly on the nuts of two species of palm tree, the Acuri Palm (Scheelea phalerata) above and the Bocaiúva (Acrocomia aculeata). The Acuri fruits all year long and is the main source of food, while the Bocaiúva nuts ripen between September and December, coinciding with the peak period of hatching of the chicks. 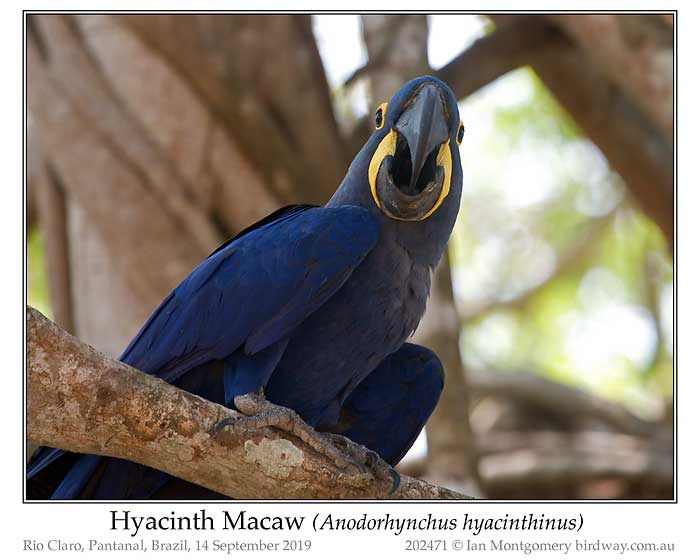 The nutcracker bill of Macaws are similar to those of Cockatoos, with a strong slender upper mandible aligning with a groove in the lower mandible and both can crack hard nuts with ease. The two groups are not closely related so the structures have evolved independently. Cockatoos are a purely Australasian family (Cacatuidae) while the Macaws belong to several, genera of South American Parrots (family Psittacidae, sensu stricto, or sub-family Arinae, depending on the taxonomic authority). 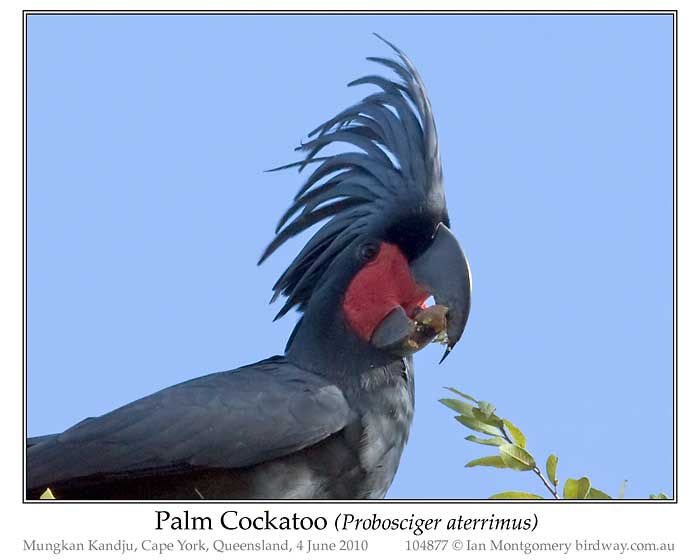 he popularity of Hyacinth Macaws as cage birds almost led to their extinction in the wild in the 1980s. In this decade, perhaps 10,000 birds were trapped leaving only about 3,000 in total. The population also suffered from habitat destruction and removal of the trees on which they depend. Happily in 1990, the Hyacinth Macaw Project was started by the biologist Neives Guedes and has resulted in a tripling of the population to 5,000 in the Pantanal. You can read about it here World Wildlife Fund Brazil or download this pdf Hyacinth Macaw Project. There are, however, other populations in Brazil which have declined from a total of 1,500 birds to 1,000 in the same period, so the species is still listed as Vulnerable (2014), an improvement on its Endangered status in 2000. 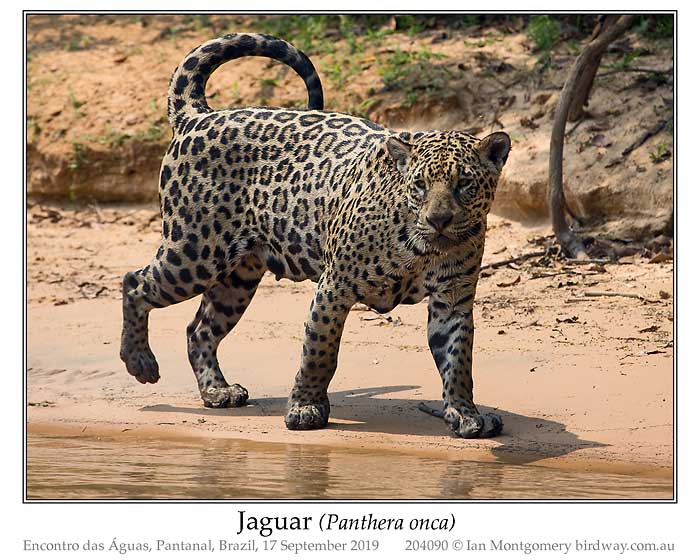 Ecotourism in the Pantanal has played its part too because of its economic importance and the other major icon, the Jaguar, has benefitted also. Boat trips from Porto Jofre in search of Jaguars is big business these days and some of the local jaguars have become quite habituated to throngs of boats and allow approach to within ten metres or so. We saw our first Jaguar crossing the road at Pixaim on our way to the Jaguar Lodge and subsequently spent two full days on boat trips when we saw another four, some of which we watched for long periods at close quarters. The one in the photo is a female which has just emerged from hunting in the river and her fur is still wet. She is lactating, so we can suppose that she has some cubs hidden in the forest.

I've been steadily adding Brazilian and Chilean bird photos to the website at the rate of about one per day. If your interested in viewing them, start at the Recent Additions page which has thumbnail links to each of the species.