If you remember that far back, the last Irregular Bird was on the birds of Christmas Island. Here is another tropical island, Isla de la Plata (Silver Island) in the eastern Pacific just off the coast of Ecuador. Unlike Christmas Island, it isn't remote, just a 40km/25mile boat trip from Puerto Lopez. So it doesn't have any endemic birds, but it does have nesting colonies of interesting seabirds. I visited it in October 2005 with Jo Wieneke. She was on her way to the Galapagos, while I was on my way back to Australia on a round the world fare. 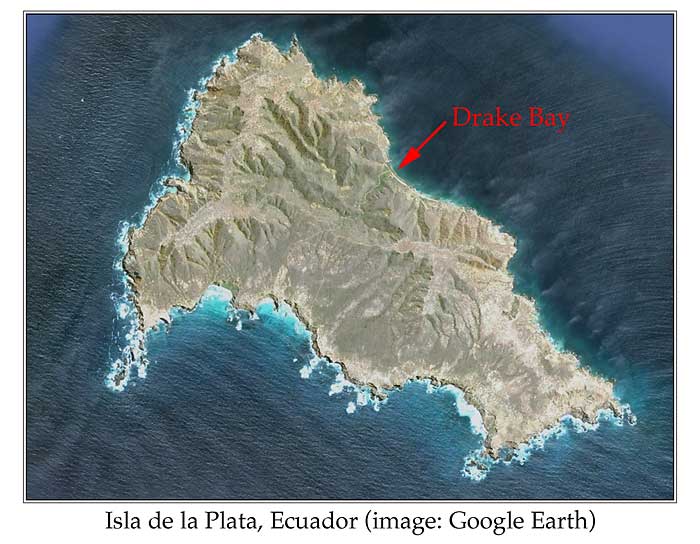 It's relatively small, about 5km/3miles long from northwest to southeast, uninhabited, with the only building - at Drake Bay, above - being the information centre of the national park (Machalilla) of which it is part. Like Christmas Island, it is surrounded by cliffs and the only beach of note is at Drake Bay, the landing place for visitors and the start of a network of walking tracks around the island. 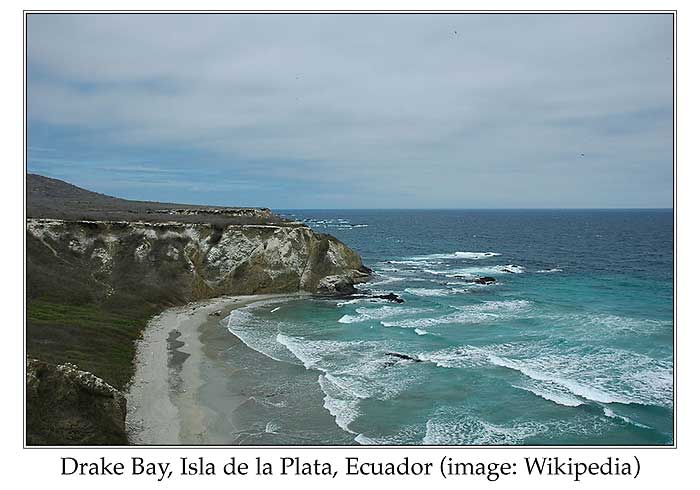 The Bay is named after Sir Francis Drake who, as captain of the Golden Hind, was here in 1579, plundering Spanish ships carrying plundered native treasure. There is debate over whether the name 'Plata' refers to silver in Drake's possession or the white, guano-covered cliffs and if you are interested you can check up on the history of Drake's adventures around Isla de la Plata here. 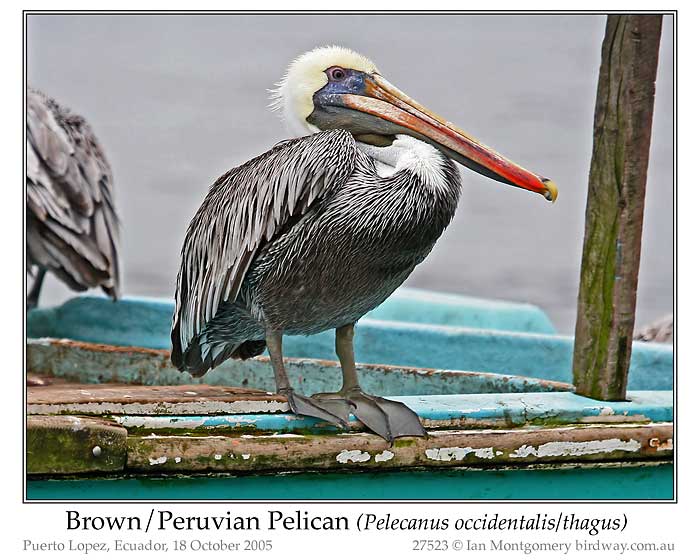 Anyway, back to birds. Puerto Lopez, the departure port for day trips to the island is a fishing village and is notable for plenty of Pelicans, lounging around on the colourful fishing boats waiting for a free feed. This part of the coast of Ecuador marks the transition from the northern Brown Pelican (Birdway) to the southern Peruvian Pelican (Birdway). The latter has been treated in the past as a subspecies of the Brown but the two are now regarded as different species. These ones look intermediate to me and I've given up trying to pin them down to one species or the other. In any case, it was lovely to get a close-up view of these spectacular birds. 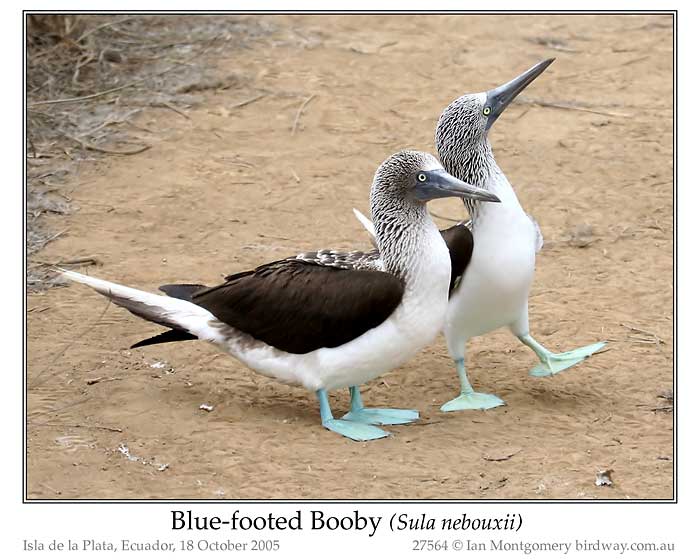 Isla de la Plata is often referred to as the Poor Man's Galapagos as it costs only about 40USD to visit it and shares some of the iconic species of the Galapagos such as the Blue-footed Booby. These were to be found nesting on the walking tracks and appeared quite undisturbed by human visitors. The male in the first photo is displaying to the stationary female by walking around her and showing off his blue feet. Foot colour is very important to boobies. She looks completely unimpressed, perhaps because he is too young and his feet aren't blue enough yet. 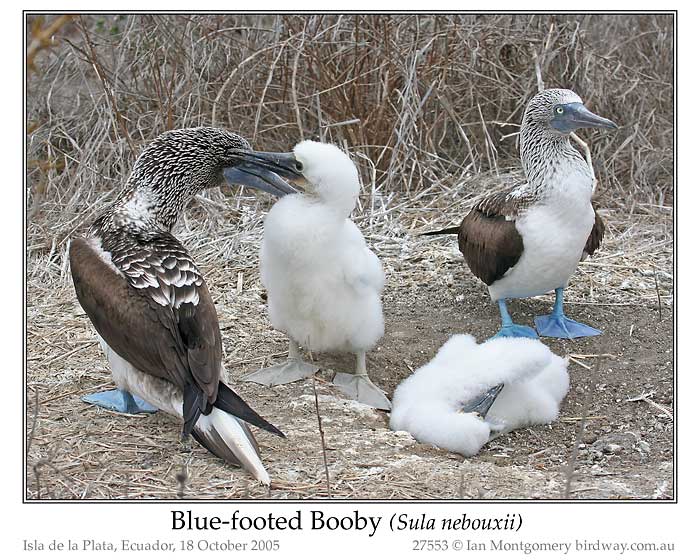 The next pair clearly have what it takes and the male on the left has blue enough feet to melt the heart of any prospective mate. The sexes look similar but females are generally bigger and the irises of males appear whiter as female irises have a dark inner ring around the pupil. I tend to think of the Blue-footed Booby as mainly a Galapagos specialty but in fact it's breeding range includes Baja California in Mexico and along the coast from Panama to northern Peru. 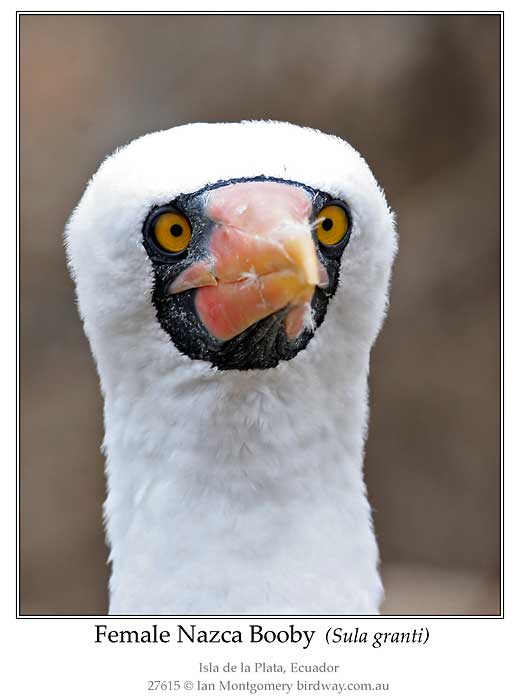 Like Christmas Island, Isla de la Plata has three species of nesting boobies. The second is the Nazca Booby, a black and and white booby with orange bill and eyes. It bears more than a striking resemblance to its close relative the Masked Booby (Birdway), which it replaces in the eastern Pacific where its main population centre is also the Galapagos Archipelago. The Nazca used to be treated as a subspecies of the Masked, which occurs in tropical and subtropical water around the world including offshore islands around Australia. The main field mark distinguishing the Nazca is the coral pink, rather than yellow, bill but there are also morphological differences including smaller size and longer wings and tail. 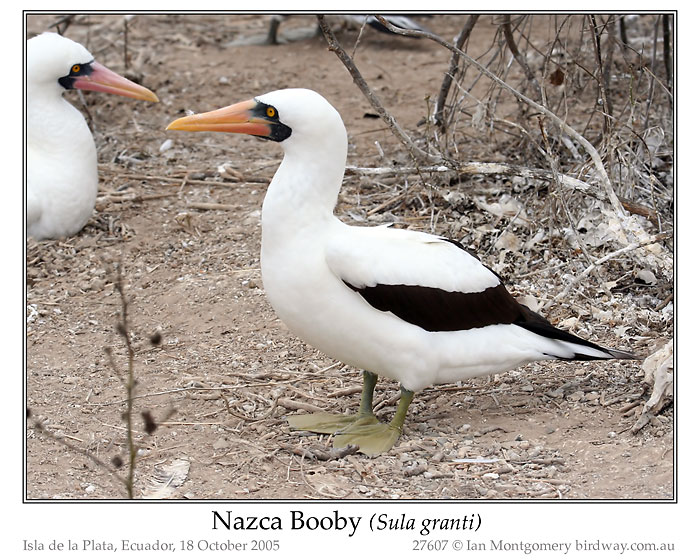 Bill colour differs between the sexes: the bird in the background in the second photo has a pinker bill and is female. Nazca Boobies have khaki feet, hardly something to get excited about, but there's no accounting for differences in taste. 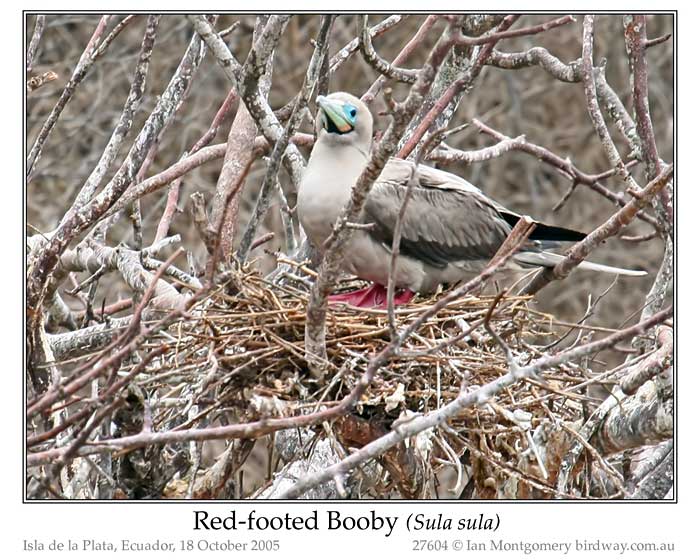 The third species of Booby is the Red-footed, another species with a pantropical distribution and which we encountered on Christmas Island. There, the birds were of the white morph; here they are of the brown morph. The one in the photo is an adult bird (juveniles don't, of course, have red feet) at its nest.

One might wonder ecologically why various species of booby have such overlapping distributions. It seems that they differ in the feeding habits. Blue-footed Boobies feed mainly on schooling sardines, anchovies and mackerel and feed gregariously, often diving in unison, and also feed on flying-fish. The diet of Nazca Boobies varies by location but includes larger schooling fish and flying-fish. Red-footed Boobies feed mainly on flying-fish and squid and often feed at night when squid come to the surface. 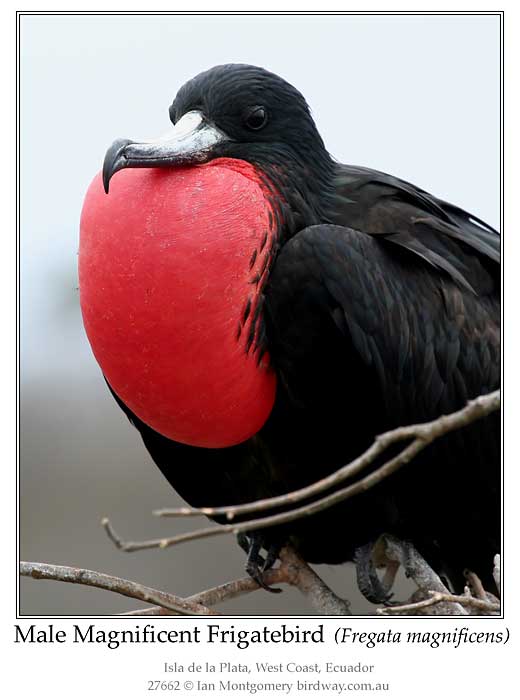 Christmas Island boasts three of the five species of Frigatebird, including the endemic Christmas (Island) Frigatebird, the Lesser and the Great. Isla de la Plata has only one, the Magnificent, but this is the largest of the five species by way of compensation. Adult males have entirely black plumage making them difficult to distinguish in the field from the Great. Males of the latter have a brown wing-bar, but so do a few male Magnificent. Female Magnificent Frigatebirds are similar to female Great but are larger and have a white nucal collar (below). 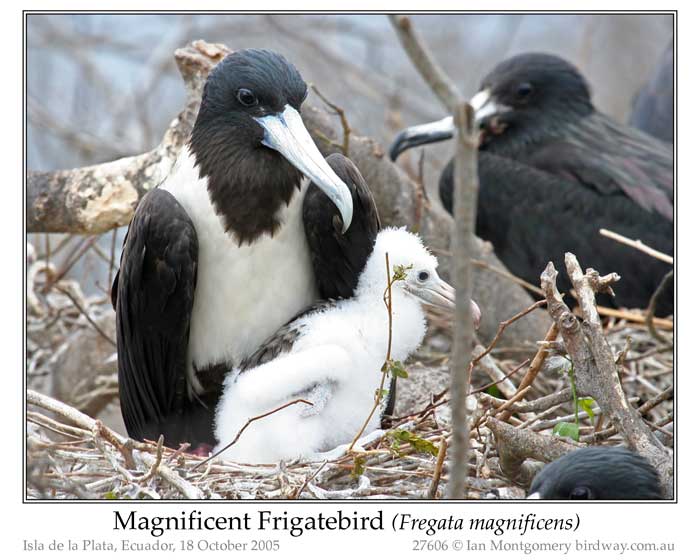 The Magnificent Frigatebird is closely related to the Great and both it and the fifth species, the Ascencion Island Frigatebird, used to be treated as races of the Great. The Great also occurs in the eastern Pacific but it is mainly an offshore species and does not breed on Isla de la Plata, though both breed in the Galapagos so their ranges are not exclusive. The distribution of the Magnificent is mainly the tropical and subtropical eastern and western coasts of the Americas, with a relict population on Cape Verde Island off the west coast of Africa. 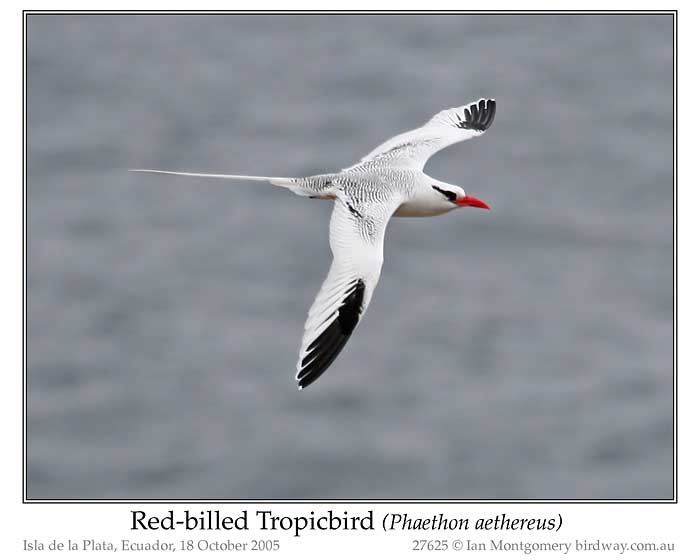 Christmas Island has two of the three global species of Tropicbird: the Red-tailed and the golden morph of the White-tailed. Isla de la Plata has the third: the Red-billed Tropicbird. This is probably the least numerous of the three species with three subspecies in the northwestern Indian Ocean; the Atlantic south of the equator; and, the most common and widespread subspecies off Cape Verde, in the Caribbean and the eastern Pacific. Adult birds retain the barred plumage on the back and wings that is otherwise characteristic of juvenile birds. With a wingspan to 106cm/42in and length, including tail streamers, to 105cm/41in , this is the largest of the three species. It feeds mainly on flying fish, usually by diving but will also take them in flight.

Isla de la Plata has a very small population, less than 20 pairs, of the only tropical Albatross, the Waved Albatross, but unfortunately we didn't see any. It breeds mainly on Hood Island in the Galapagos with a population of less than 20,000 pairs. The population has declined in recent decades owing to mortality as bycatch by fishing vessels and is classified as critically endangered. 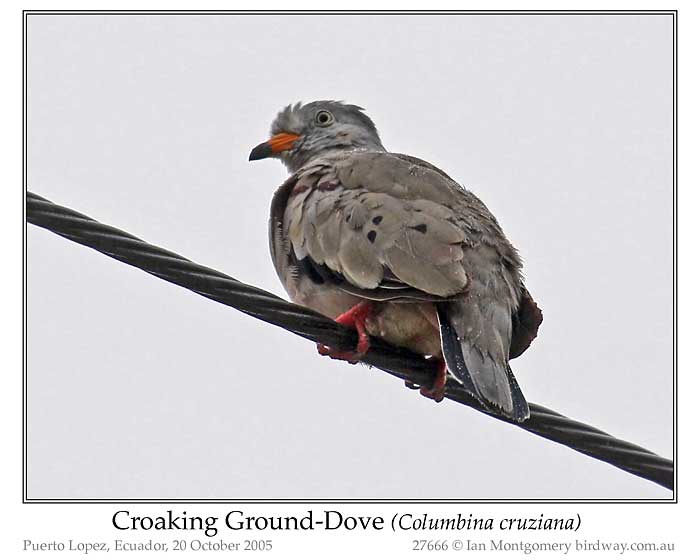 The island is rather arid with scrubby vegetation and didn't seem to support many species of terrestrial birds. We did however see White-tipped Doves (Birdway) and Croaking Ground-Doves. I photographed the Croaking Ground-Dove above when we were having breakfast in Puerto Lopez a couple of days after our visit to Isla de la Plata. 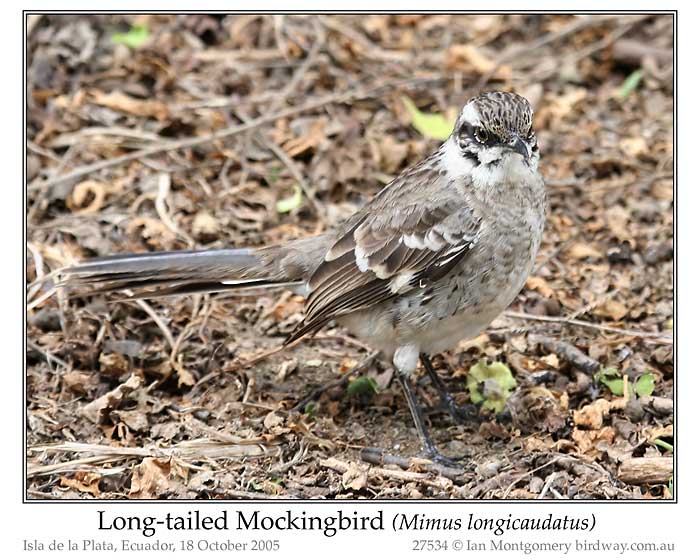 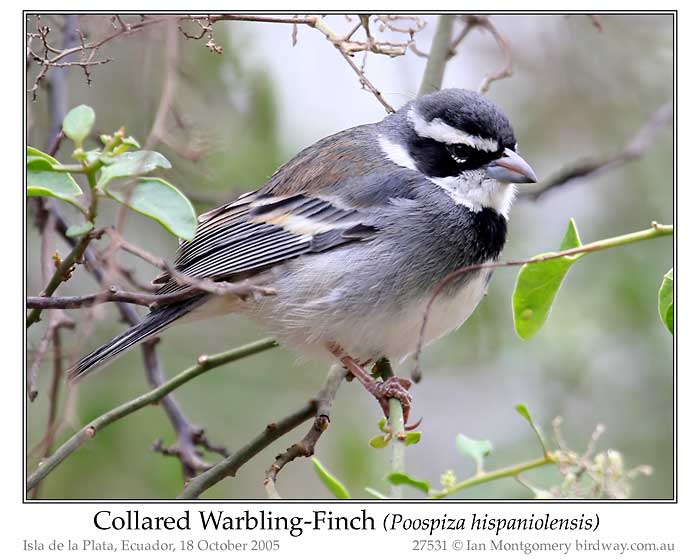 The Collared Warbling-Finch isn't a finch but a member of the Thraupidae family (Birdway) which comprises a rather heterogeneous collection of birds including most, but not all, of the Tanagers. It has a similar distribution to the Long-tailed Mockingbird along the coast of Ecuador and Peru. The bird in the photo is a male; females have streaked, brownish plumage without the black breast-band or black markings on the head.

I hope you've enjoyed our virtual tours of two tropical islands. I have a couple of very cold islands, one in the northern hemisphere and one in the southern, in mind as candidates for the next two Irregular Birds.