I've recently returned from a three week trip to South America with Trish, a close, birding friend of mine from Townsville. Our main destination was the Pantanal in western Brazil, a wetland famous for birds and jaguars, where we spent two weeks. On the way back to Australia we had a five day stopover in Santiago, Chile, fortunately before the recent unrest started. The red marker on the map below indicates the city of Cuiabá in the Brazilian state of Mato Grosso. This is the usual gateway to the Pantanal and is serviced by regular, direct flights from São Paulo on the east coast. 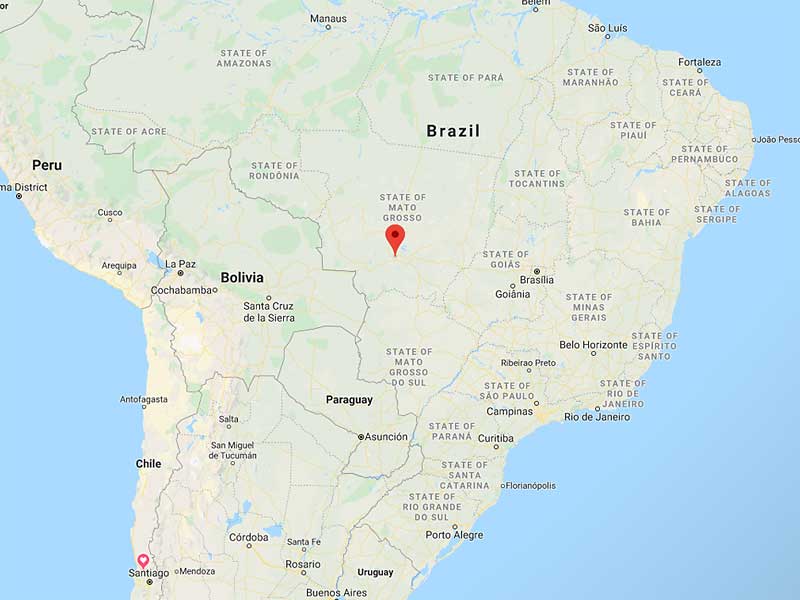 The Pantanal floods an area of perhaps 150,000 square kilometres southwest of Cuiabá during the wet season, November to March, and then gradually drains south during the dry season via the Paraguay River. As it does so, the wildlife becomes increasingly concentrated in the remaining water, providing the best opportunities for viewing wildlife from about July until October. Road access is provided by the Transpantaneira, a 150km gravel road which runs through the northern Pantanal from Poconé, 100km south of Cuiabá, to Porto Jofre as on the map below. 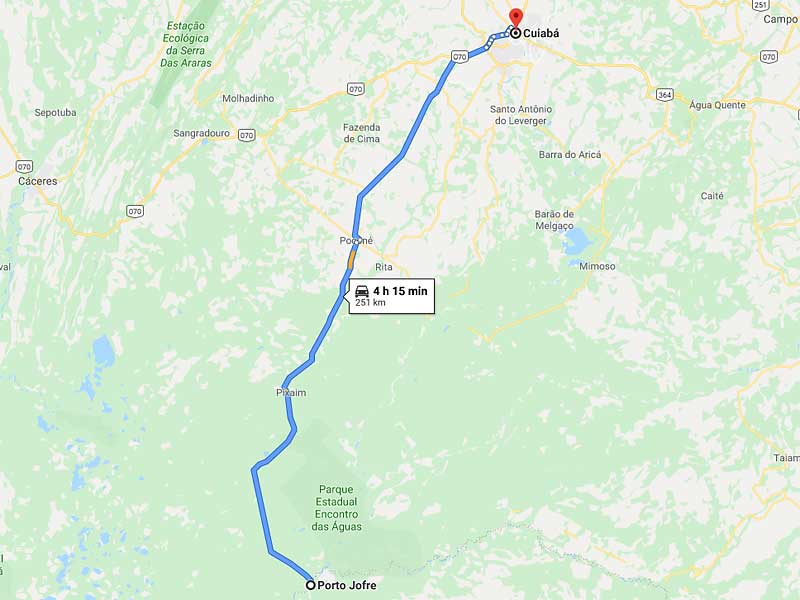 The Transpantaneira was planned as an overland route to Bolivia, but only got as far as the rather wide Rio São Laurenço at Porto Jofre. The road has about 150 bridges of variable quality. These are steadily being upgraded to cater for the tourist traffic but some of the remaining wooden bridges - the one below is one of the worst - aren't for the faint-hearted. Rather than take an expensive guided tour, we made our own arrangements, renting an SUV in Cuiabá, booking accommodation at three wildlife lodges via the internet and acquiring a working knowledge of Brazilian Portuguese. 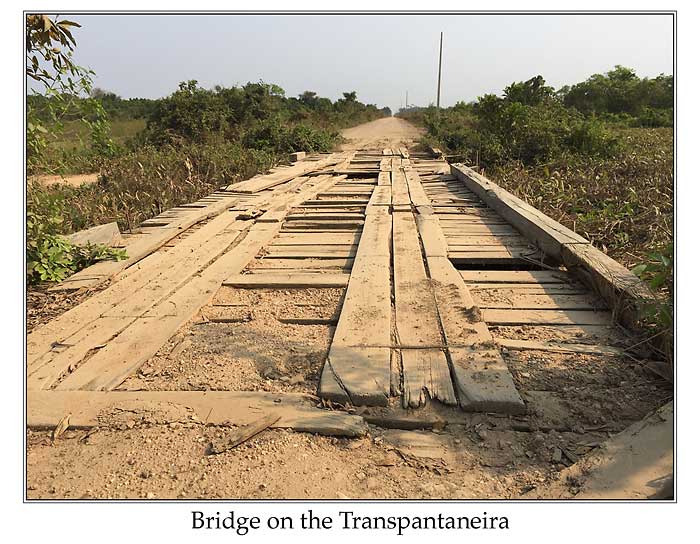 Two of these lodges, or Pousadas in Portuguese, were in the northern part south of Poconé and were primarily birding lodges, while the third, the Jaguar Lodge, about 40km north of Porto Jofre, provided opportunities for boat trips from Porto Jofre to view Jaguars in the area named the Parque Estadual Encontro das Aguas on the second map ("Meeting of the Waters State Park"). 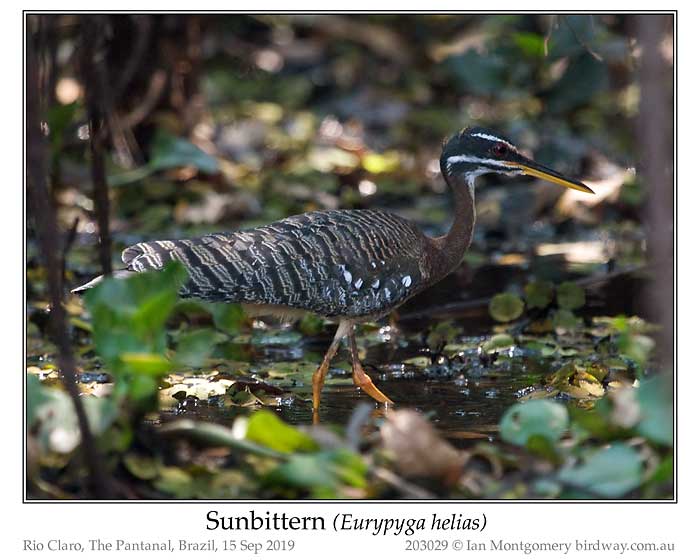 Trish and I had overlapping priorities: top of her list was perhaps the Jaguar as some years ago she had done field work on Lions and Leopards in Africa; my list had about twelve species of birds selected on various criteria including beauty, strangeness and taxonomic uniqueness. Right at the top of my list was the Sunbittern which qualified on all criteria. I'll say a bit more about its taxonomy later but it first attracted my attention in 2015 when I found out that the only (and rather distant) relative of the Kagu of New Caledonia is the Central and South American Sunbittern. 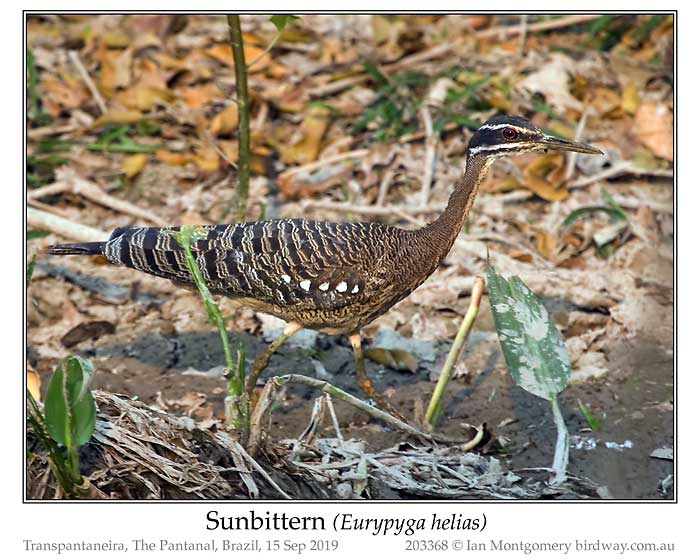 Our first lodge was the Pousada Rio Claro, named after the river on which it was situated. The lodge offered two-hour boat trips on the river and for a relatively modest extra fee, private boat trips were available so we did two of those. We had the same boatman on both but it wasn't until the second one that we managed to convince him that our main target was the Sunbittern. After one and a half hours of diligent searching in riverside vegetation, sharp-eyed Trish spotted one (first photo) hunting for food in a dense and gloomy swamp beside the river and our skilful boatman managed to approach it silently so that I could get photos. Missão comprida, as they say in Portuguese. 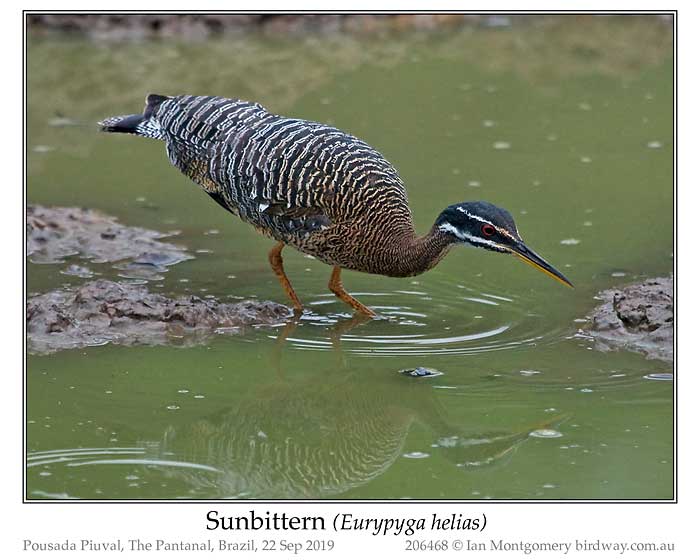 Later that day, we went for a drive along the Pantaneira and stopped at a muddy pond beside the road to see what was around. To our great surprise, a Sunbittern wandered out of the surrounding vegetation in full sunlight (second photo), proving once again that difficult to find birds have a habit of appearing readily once the spell has been broken by seeing the first. In size, 43-48cm/17-19in long, they were smaller and more delicate-looking than I'd expected. Their intricately patterned plumage is very beautiful and wonderfully cryptic. The vertical bars on the body and the horizontal lines on the head break up its outline in a remarkable way both in the shade of the forest and in bright sunlight. 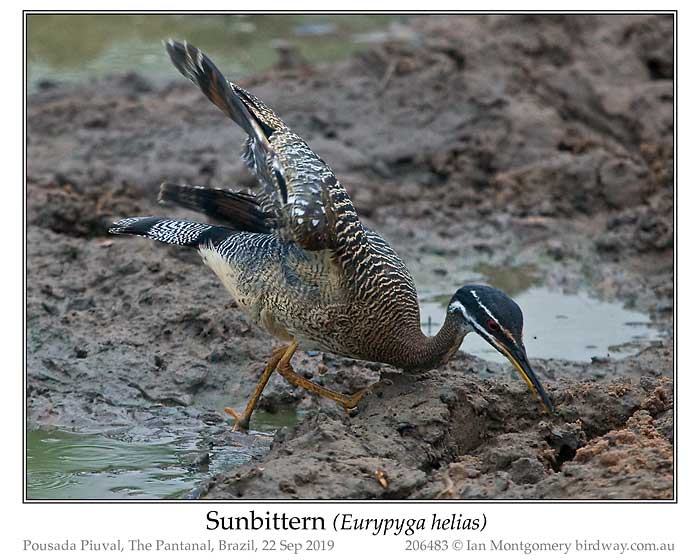 They feed on a variety of aquatic prey, both vertebrate and invertebrate. Their technique is stealth (third photo) followed by a lighting strike (fourth photo) which is wonderful to watch. 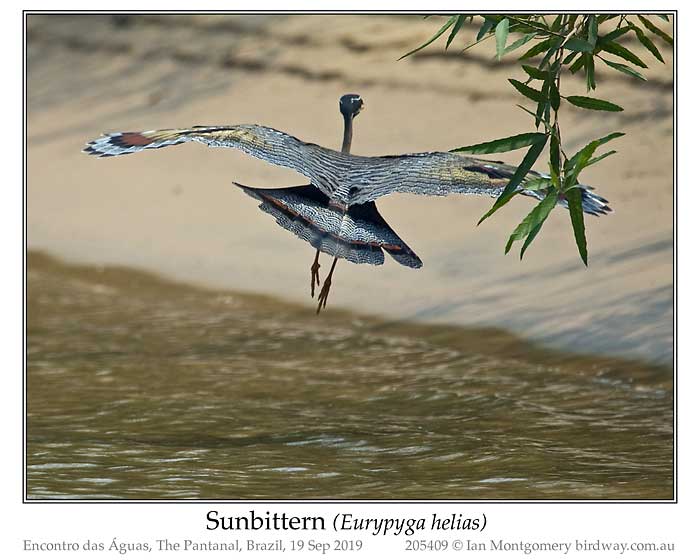 The Sunbittern normally appears cryptic but when it spreads its wings, in flight or in display, it reveals the spectacular pattern on the flight feathers that gives it its name. These are like huge eyes - similar to the wings of some butterflies - and are used both as threat display and in courtship. We found that Sunbitterns are reluctant to fly and when disturbed tend to walk away and hide in dense vegetation. The fifth photo shows one in flight and provides a glimpse of the wings, but it wasn't until towards the end of our stay in the Pantanal that I managed to get a photo of one spreading its wing in preparation for flight (sixth photo). 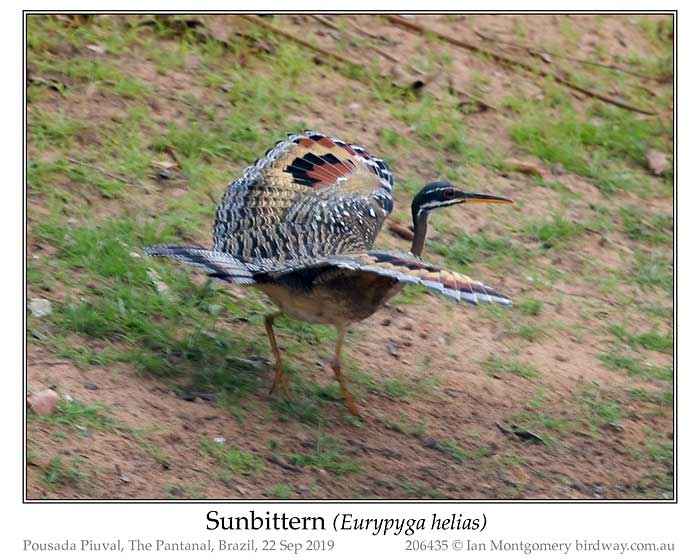 The classification of the Sunbittern has historically been a headache for taxonomists. Morphologically, it bears some resemblance to herons and rails (which aren't related to each other) and has traditionally been placed in the order Gruiformes which includes the Cranes, Rails and Bustards. Recent studies (e.g. Hackett et al. 2008) which combine the fields of evolution and genomics (the study of genes) have found that the Sunbittern and the Kagu (below) belong to the same ancient lineage which arose during the same epoch as the other major groups of birds. Consequently, a new order has been created, the Eurypygiformes, containing two families each with a single species, the Eurypgidae (Sunbittern) and the Rhynochetidae (the Kagu). The two species don't look very similar, but the Kagu also has a banded pattern on the wings used in display. 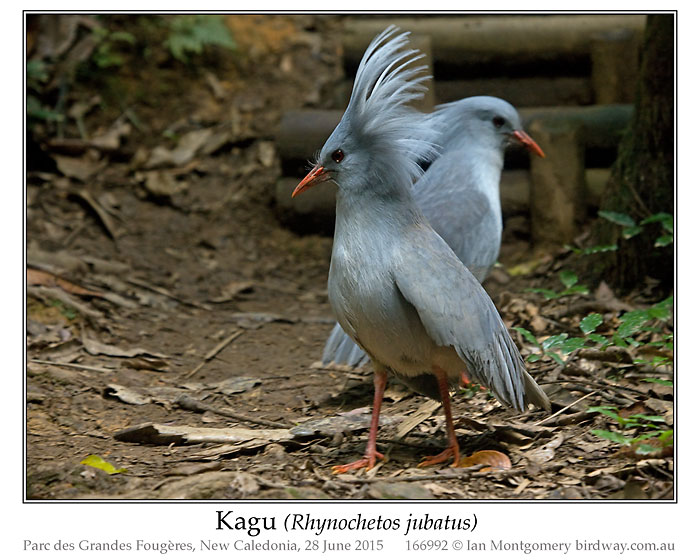 Unlike the flightless, endangered Kagu, endemic to New Caledonia, the Sunbittern is widespread through Central and South America from Guatemala to Bolivia and Brazil in suitable habitats combining forest and water. The Pantanal, incidentally, is near the southern end of its distribution. How one species ended up in New Caledonia and the other in the Americas is an interesting problem for biogeographers.