It’s been a long time since the last bird of the moment, so here is a special one to make amends. Furthermore, at a time of increasingly depressing stories about the state of the planet, it comes with a great conservation story. 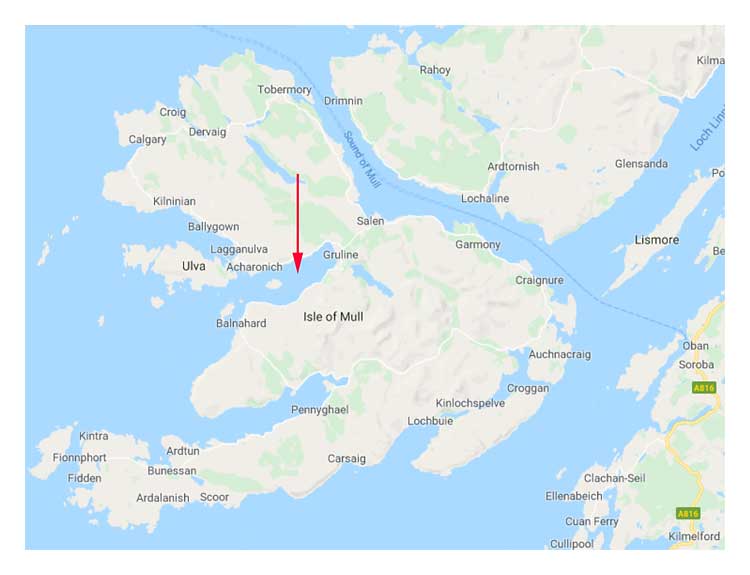 I’ve recently returned from a short visit to Europe. The purpose of the trip was to catch up with family in France and Ireland. The temptation to do a bit of bird photography as well was too great to resist so I went from Paris to Dublin via the Isle of Mull in Scotland (above) in search of White-tailed (Sea) Eagles. My nephew Ian joined me from Dublin so the detour naturally still qualified as family business. 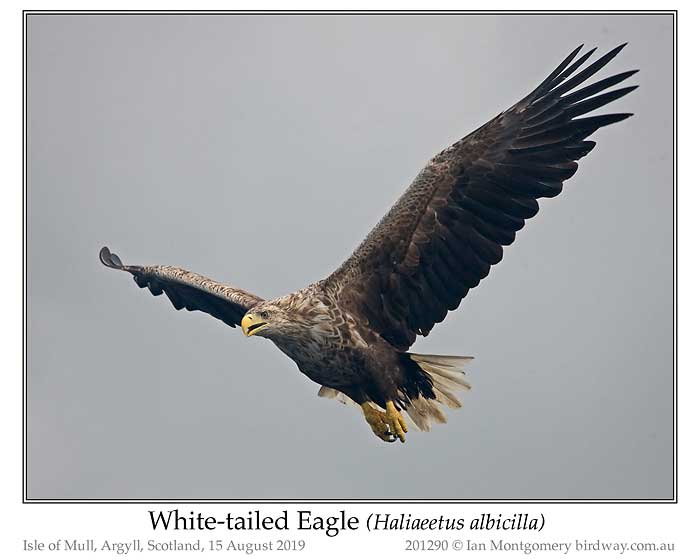 We chose the Isle of Mull because of its reputation of being one of the best places in Europe to see White-tailed Eagles following their successful reintroduction to Scotland over the last 45 years. On our third and last day, having had little success finding any eagles on our own, we went out with Mull Charters on their Sea Eagle Adventure trip, during which I took all of these photos. The red arrow in the map above shows the approximate location in a beautiful bay with high mountains forming a spectacular backdrop. 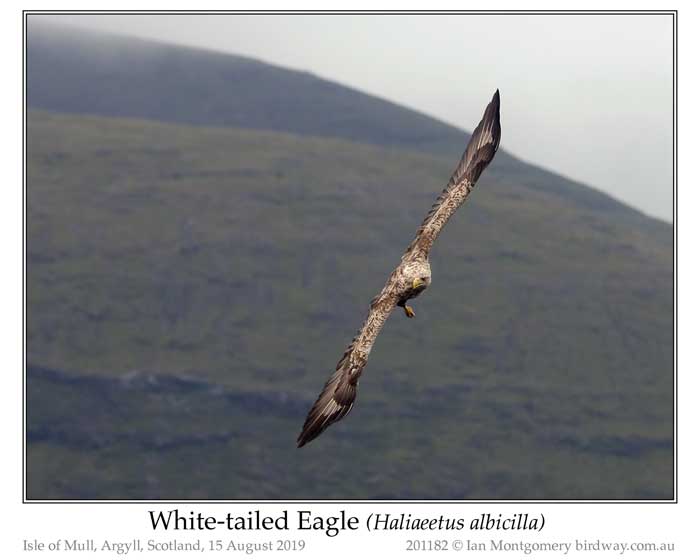 The sea eagles in this region on the west of the island have become accustomed to being fed on frozen mackerel, providing spectacular views of these huge birds in action and providing wonderful photo opportunities. The above photo shows an eagle banking to get into position to come in for a fish and the next four photos shows the results of this foray. 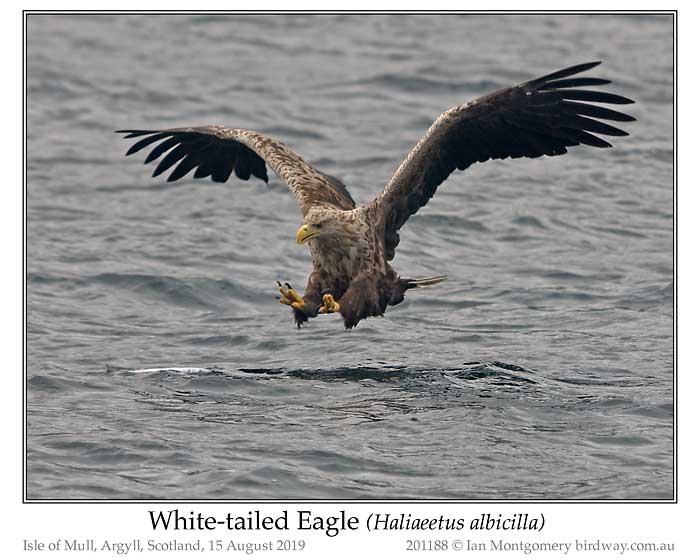 The eagles come in very fast. Three seconds elapsed between the banking photo 201182 and the next one 201188 showing the bird just about to grab the fish, visible floating on the surface in front of the eagle. This photo and the next three, 201189, 201190 and 201191 were all taken in the space of one second so there is little margin for error on the part of either the eagle or the photographer. 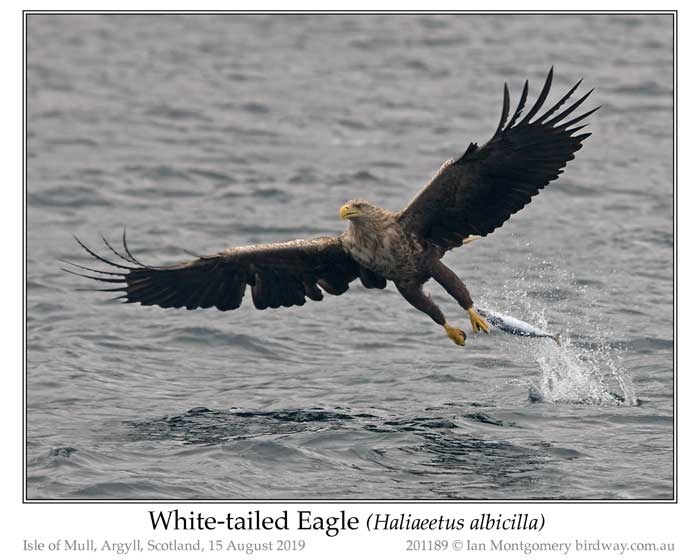 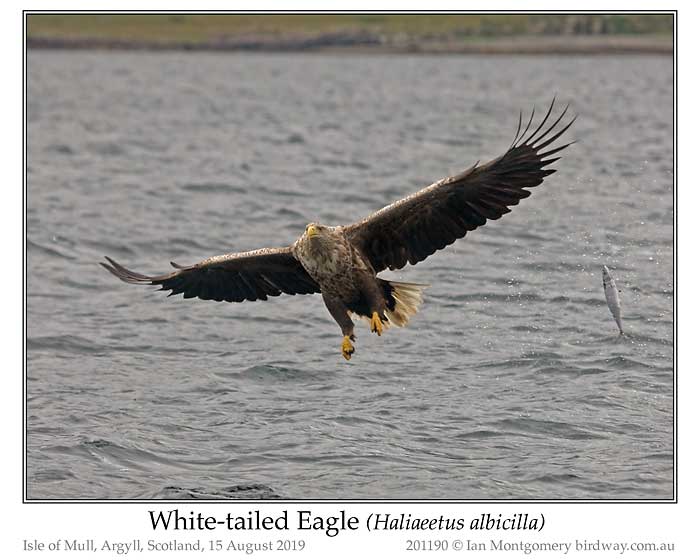 A little over 20 seconds after the abortive attempt, another bird, photo 201208, has swept in and successfully scooped up a fish. As soon as a bird had captured a fish, it left the vicinity. 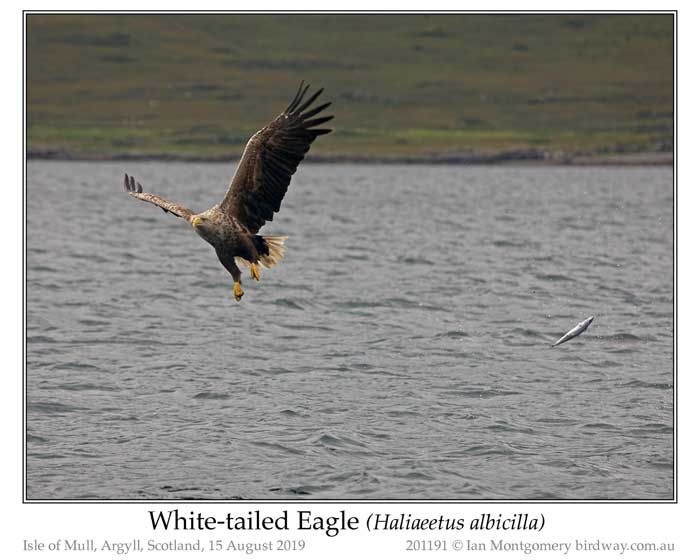 These eagles were very vocal, often making a repeated klee, klee, klee call which sounded gull-like to me and rather undignified for such a large raptor. The captain on the boat said that the most vocal bird was a female objecting to the presence of other eagles in her territory. 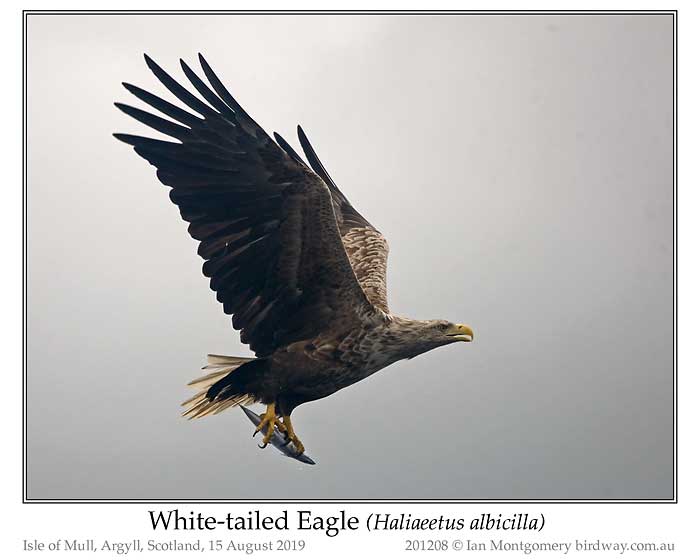 Until the eighteenth century, White-tailed Eagles were widespread throughout Eurasia from Ireland to Siberia. In the nineteenth century, increasing persecution by farmers, gamekeepers, shepherds and fishermen and the spread of firearms led to population declines in Europe and ultimately to extinction in Ireland (last known nesting attempt in 1898) and Britain (last breeding attempt in 1916). 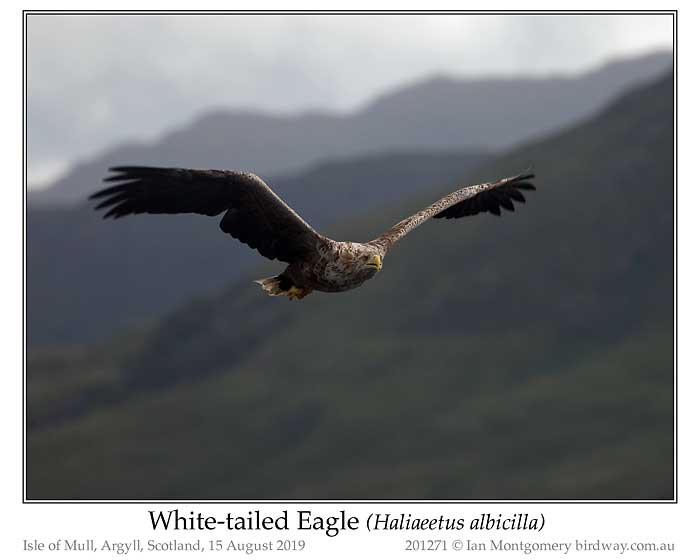 Like its close relative the Bald Eagle of North America, the remaining populations of White-tailed Eagles suffered badly from the use of persistent organochloride insecticides such as DDT after the second world war. The banning or phasing out of such insecticides and more enlightened attitudes to conservation led to increases in eagle populations in Europe and North America in the final quarter of the twentieth century, making possible their reintroduction to places where they had become extinct. 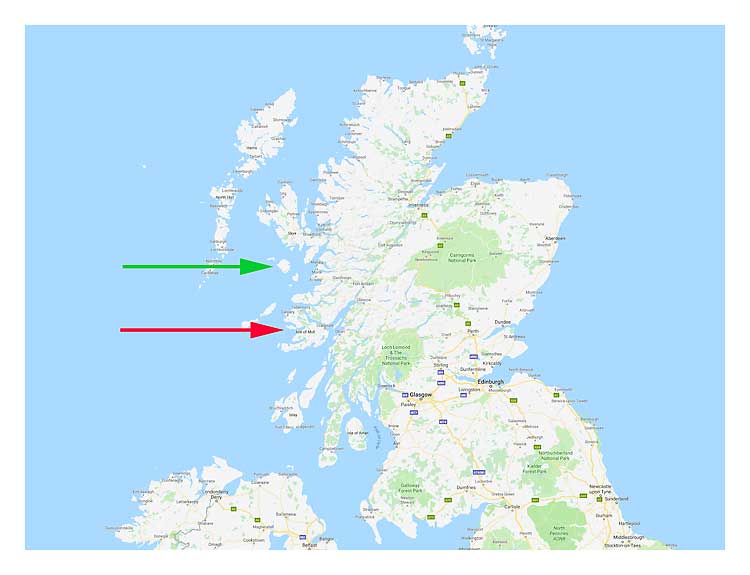 The Scottish reintroduction started in earnest in 1975 with Norwegian birds being introduced to the Isle of Rum, shown by the green arrow on the map (the Isle of Mull is indicated by the red arrow). Later introductions were done to the mainland near the Isle of Rum (Wester Ross) in the 1990s. There are now about 130 breeding pairs in Scotland, mainly in the west and there are 22 pairs on the Isle of Mull.

Reintroductions to eastern Scotland were done between 2007 and 2012. In August 2019, six Scottish-bred young eagles were released on the Isle of Wight as the first stage of reintroducing them to southern England. Meanwhile, in Ireland a parallel reintroduction of Norwegian birds started in 2007 with the first successful nesting in 2012. Now there are about eight breeding pairs (and a few more holding territories) but the population is not yet large enough to be self-sustaining.

So, there you have it. A good news story and, for nephew Ian and I, a memorable day with these magnificent birds of prey in Scotland.